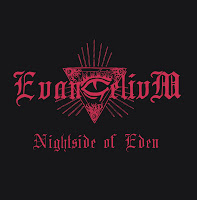 Evangelivm is a Russian duo comprised of members eerily dubbed 'I' and 'II', who create a highly mystical, atmospheric angle on the the black metal genre. Vast, spacious folds abound here, the band content on letting simple note progressions ring clear and loud across their subliminal obscura, and as Nightside of Eden proves, this can be both a boon and a weakness as they experience alternate periods of calm and explosive fury over suppressed mechanical drumming. 'II' is responsible for the vocals, and he's got an appropriately ghoulish bark which is laid central in the mix, with the guitars shimmying alongside in a dire melodic tangent, the bass simple but steady enough to craft a grim undercurrent for the desolation above.

To be honest, despite the relative imbalance of the drums and vocals here, I actually like the way Nightside of Eden sounds. It suits the band's lucid, hostile transmigration very well, and allows the guitars to breathe the stuff of nightmares onto the less impressive rhythm section, casting it in a fiendish, new light. Where the album doesn't always hold is in the actual writing, as it too often resorts on some repetitive, subtle and familiar segues that attempt to hypnotize the listener with little success. For the intro ("Abyssus Abyssum Invocat In Voce Cataractarum Tuarum") and outro ("Nightside of Eden" itself), this is a beautiful process, but when you get to the longer pieces like the 9 minute "Divine Flames" or 8 minutes of "The Void", there are entire segments of composition that feel bland and undercooked in the searing flames of inferno that undoubtedly lick at this pair of minds. "The Black Devotion" is a better example of their craft, simple and haunting and at about 4:30 minutes, you don't quite get tired of its excavations into the vile partitions of your psyche.

In the end, there is not a lot within Evangelivum that you haven't heard before, and better. To the band's credit, they operate with a mixture of measured intensity and slower, melancholic drawl, and are likely to draw a cross section of black metal fanatics that delve into both the depressive and blistering sides of the spectrum. The album's unpolished production does work towards its favor, and there is no question of the band's nocturnal intent, for though their compositions do little to thrill or impress, they certainly do manage an evil atmosphere that under the proper circumstance might complement a beastly ritual or caustic nostalgia. Nightside of Eden is far from a bad album, but it doesn't really stand out among such a huge crowd of hooves and horns already dug into this space, rebuking all comers.