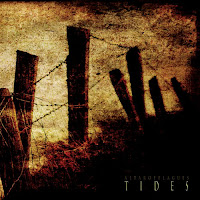 Altar of Plagues are easily one of the most promising acts brought to bear on a largely vacant Irish metal scene in decades. Their brand of baleful, beautiful post-black metal does inhabit the same, worn space as many trend-driven acts of the day, but they manifest a strange, suburban sincerity that is impossible to escape, and I find their output far more valuable than a large number of the other acts to which the craven hipsters offer ritual masturbation. They're also no stranger to the EP format, having spread their buzz through the underground with previous 30-minute outings Through the Cracks of the Earth (2007) and Sol (2008), so I had every confidence they'd be able to fill up another half hour with appropriate aural decay.

And this is precisely what they do over the two tracks and 36 minutes of Tides, which shows all the strength of their 2009 debut White Tomb, giving its constituent halves even more time to individually breathe. Like most bloated compositions, the listener should expect long, drawn out passages, with few tectonic shifts in pacing, as Altar of Plagues transport you into the numbing miasma of their existence. It might be shortsighted to really call them 'black metal', as they best resemble an epic disciple of Neurosis or the oft lauded, fellow disciple Isis, but certainly there are surges of monstrous tremolo picking and snarling vacuum that pepper the landscape of "The Weight of All", which somehow succeeds in absorbing you through 20 fucking minutes of bleak, riveting content. Periods of vapid calm and sludgy menace alternate through a dour, minimalist panorama of graying and sepia hues, and it's the better of the two pieces, though the shorter, 15 minute "Atlantic Light" should likewise titillate if you appreciate its somber heft.

Like most albums of this variety, there is a time and place for Tides which is not constant. This is not the sort of record you'll put on when you're in need of a burst of energy and enthusiasm. This is the soundtrack to a slowly wasting, mass consciousness, and should be treated as such when you choose your time and location. Driving or walking through the abandoned urban streets, so blank that you feel zombies are going to launch themselves at you from hidden precipices, or an overcast, ugly countryside where even the cattle waddle about in disinterest, these are the ideal vehicles of appreciation for such hymnals that Altar of Plagues evoke. Tides is proof that there is some life left in them to leech, that perhaps this will not be a one shot wonder, that their suicidal oppression will persist into a new scheme, but the next time out, it might be compelling to hear them branch into various spectra of emotion rather than flogging the same dried tears.