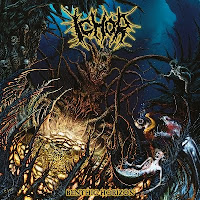 I can recall this young German band's debut album from last year, The Siege, as a slab of reasonably crafted death metal with a surreal, standout album cover but diminishing returns in the songwriting department. Nothing offensive or bad in any way, but simply not enough to stir the waters of the genre, so choked with pond scum and tadpoles that the new births are only faintly recognized on such a primordial level. Benthic Horizon is the natural follow-up, a more matured and dynamic aggressor that delivers all the excitement one normally associates with modern death: taut drumming that will effortlessly burst into blasted mode with little notice; choppy guitar riffs that never encounter much friction in their acrobatic diaspora, despite the lack of truly stellar riffing; and lastly, angry and grunted vocals that surge across the rhythmic linebackers like a psychotic quarterback, hurling the pigskin with expected precision.

Yes, all the keys to the kingdom are present, and there is enough technicality here to throttle the worship masses of either the recent Californian USDM explosion or the Polish hammering of a Behemoth. "The Gorgon" and "Barotrauma" make for a punishing one-two combo, nothing stealthy happening here, just a tireless workout of energy that seems to gradually increase in quality through the lead bridge and slightly more bristling venom of the latter, though it does devolve into some sadly average chug and squealing that does not evoke the imagination much beyond the base familiarity. A few tracks like "Conquest of Darkness" and "Among the Swarm" open with steady grooves before exploding back into the stratosphere of speed and brutality, but some of better overall riffs are delegated to the rear in "Possessor of Soil" or "The Deepest Blue is Black" (the best on the album).

This said, the biggest hurdle facing Ichor is that they truly fail to stand apart in any way from the enormous sea in which they've developed. Most of the riffs here are interchangeable with any of a few hundred other modern death metal albums, and those that do manage to immerse the listener into the turbulent, haunted world of the composers ("The Deepest Blue in Black") come too far into the record, and even these lack some degree of novelty. If you're requirements for brutal death are simply competent performance, great production, adequate technicality and brick hurling anger, then Ichor could be mentioned alongside better bands like Fleshgod Apocalypse, Inherit Disease, Hour of Penance or Flesh Consumed. But Benthic Horizon feels empty beyond that, arriving only in a rapidly stagnated spawning grounds that a decreasingly few will ever drink from.