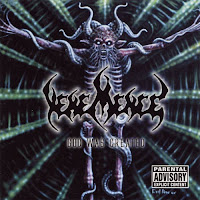 If Vehemence stirred up a buzz with their debut The Thoughts From Which I Hide, it was ultimately undeserved, not because it was the most steaming puddle of shit across the flood plain of USDM mediocrity, but because it was entirely void of any personality worth noting. The band might also have been unsatisfied, because God Was Created crosses a major evolutionary gulf in sound. Now touting a deal with big movers Metal Blade Records, the enhancements to both production and musicality seemed to coincide with a band on the way up the ladder of attention, and indeed this must have been the case. Several death metal fans I know cite this as one of their favorite albums in the genre, and while I won't claim it's anywhere even such close to such praise, it's the best of Vehemence, and their sole album worth hearing.

Basically, this is an approach to complex and somewhat technical melodic death metal which bears only passing similarities to the European bands that were already huge by this time. You can hear some vague comparisons to Dark Tranquillity, At the Gates, or early In Flames in the writing, but the Arizonans distinguish themselves by maintaining the brutal death metal aesthetics of their debut. The growls, snarls and even clean narrative vocals are a marked improvement over their debut, in that they're mixed level to the instruments rather than trying to overwhelm them like the previous album, and the songs create an occasionally hypnotic balance of tranquility and disgust. Never more so than the track "She Never Noticed Me", which is glazed with an impressive chug-melody pair off late in the bridge that rides out the playtime.

It's a concept album, and believe it or not, the lyrical implications are pretty faithful to the debut. This is a story about a disaffected youth who, in his obsession over a young woman of his acquaintance, goes on a killing spree, with some necrophilia involved. Sure, it's as fucked and twisted as you'd expect in the death metal genre circa Cannibal Corpse, but the way Vehemence have manifest and structured the contents through a chronological narrative of the music are commendable. You'll go from sympathy for this loser, to disgust at his immoral actions, and then even a morbid revulsion which extends beyond the carnal to the realm of existential terror. Of course, there's more to the story which you can read for yourselves. It's a rarity, even by today's standards and super saturation of the form, and clearly the strongest trait on the entire record, executed lovingly in tracks like "Fantasy from Pain", "Lusting for Affection", and "I Didn't Kill Her".

If God Was Created lacks, it's that it throws so many riffs at you that some are bound to slide off your armor, and while I cannot deny the amount of sheer effort these lads must have put into the album's construction, I occasionally feel some of those 'less would be more' moments that might have crafted more memorable compositions. Though they are cleverly disguised here, the band also still shifts into some of their slam breakdowns, but at least the complexity adds some depth to these that they don't seem so contrived or annoying. Earlier I lauded the band's improvement in the vocal area, and indeed, they are far better than those found on The Thoughts From Which I Hide, but they still sound to me overbearing in spots, like a metalcore band playing melodic death, and it can be distracting over the superior musical content. That said, this is the best of Vehemence's works, certainly the one to experience if you're tracking down the band for the first time, and the one they'll need to one-up.