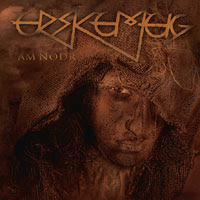 Latvian metal. The prospect is not one I tend to think about, and outside of a few noted acts like Skyforger and Neglected Fields, it's a rather barren field, at least in the perception of the international underground. Urskumug might just be the band to change that, because they possess a measured maturity and distinct flavor which, while not entirely relieved of comparisons to other, noted acts, is rapt and focused enough to cast some illusions of originality. The ever shifting lineup situation might have crippled the band's progress to this point (Krauklis being the one central, persistent force), but make no bones about it: Am Nord is a quality debut album worth the time of anyone into pagan metal void of many cliches.

No, you won't find regiments of would be minstrels fluttering their archaic stringed stupidity in the guise of a Renaissance fair gone tragically wrong, and aside from the haunting choral synth in the bridge of the title track, you're not going to encounter fairycore vocals. The experimentation here is limited to tribal, haughty percussion ("Am Nodr"), breathy but brief ambient samplings that prefix and append a number of tracks, industrial overlays, and a squelching apocalyptic intro ("2010"). The rest is progressive, writhing black metal loaded with riffs, and a clear influence from thrash and death metal. Several of the compositions ("Time of the Jackdaw", "Mother of Halfworld") are loaded with 6-7 minutes of twists and turns that, while never truly catchy, are nonetheless interesting, but my favorites here are "Talking to a Shaman's Son" with its tiny, loopy melodies that poke through the surging banks of razor-edged chords, and the oddly titled "----" which sounds like a caustic spin on primal melodic death metal. "Beowulf" is another moody, perplexing trip with loads of atmospheric content.

For such an unknown herald, the production on Am Nodr is quite excellent, especially in the steady guitars and the way the tribal and darkly brooding atmospheric elements hover just beyond the din of the driving drums. The vocals are nothing special, just the expected black metal slather, but they're loud and in charge and are never quite claimed by the eviscerated ennui of so many front men in this field. Clearly, Urskumug (whose name is taken from a character in Robert Holdstock's fantasy classic Mythago Wood) has something to offer us, even if there is much refinement to be done. I do feel like a band calling itself 'tribal' black metal should probably have a more even split of tribal and black elements, which here lean far more on the latter, but a serious, initial statement like this can only promise better things to come...I hope?