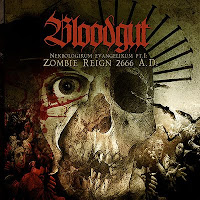 Isn't everybody sick of zombies yet? Between all the video games, video game expansions, horror comedies, comic books, films, and TV adaptations of comic books (The Walking Dead), you'd think we as a collective species might have had it up to our sawed off shotguns with the shambling, all devouring dead. Granted, we're unlikely to ever be rid of the trend in death metal, since they provide no end of debasing, gore-drenched humor and a serious menace to anyone they can in their jaws. Rogga Johansson, he of the 50 or so Swedish death metal bands, has decided to put a futurist spin on the cliche, a concept album set centuries in the future where flesh eaters take on a religious importance, a domain of cannibal corpses that commit acts of sacrilege in the name of hunger.

Pretty heady for Rogga, I will admit, but when it comes right down to it, Bloodgut is just another in his endless expurgation of creativity, with a fuzzier tone than his better known bands like Paganizer, Ribspreader and Revolting. This is your basic old school death metal, and unfortunately it's not long on riffs, so what might have been a great and somewhat unique burst of imagination is sadly reduced to just another morbid, self-serving Swedish splatter platter forced to succeed on its vomit drenched atmosphere alone. You've got the primacy of an Autopsy or Repulsion here tearing through such tasteful numbers as "Priesteater", "Gutting a Nun" and the doomed gait of "In the Butcherhole", that last being one of the most wrenching and effective pieces on the album, but the really raw, live feel to Matte Fiebig's drums doesn't seem to hold up the guitar tone all that well, and the vocals rarely have the exciting inflection Johansson is capable of emitting.

When I saw the great cover art (by Hungary's Peter Sallai) and then realized this was some sort of far flung, cohesive concept, I was quite excited, as I have grown tired of the 'basics', which Rogga has obviously already mastered in Carve, Paganizer, Demiurg, and so many others. The contents of the Nekrologikum Evangelikum are rather underwhelming aside from the guitar tone (likely to spin a few heads), but judging that it's a 'Part I', I can assume we will be visited my the Bloodgut again in the near future, and I can only hope that the writing improves to match the crushing apocalyptic undead theme. As it stands, this is really only going to satisfy those deliberately seeking out the most primal, familiar riffs in death metal, and the few touches of atmosphere are just not enough to overcome its mundane delivery. Check out Putrevore, either Revolting album or the latest Demiurg for a better time than this.