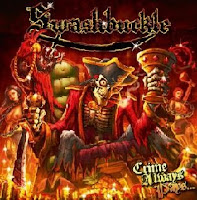 Pull into enough ports of call and you're bound to sip at the booze cask of your dreams, or finally exchange that case of niggling scurvy for whatever genital infection you've collected a-whorin'. With the third Swashbuckle album, Crime Always Pays..., the band has finally managed to scale the mizzenmast and rope-swing across the stormin' abyss beneath to a mildly more functional vessel of entertainment. I'm not claiming that this is necessarily a good disc, mind you, but it's a better proof of concept than either of its predecessors, and for a brief moment here or there, I actually found myself biting the corner of my skeptical piece of eight, and bobbing my cutlass to the band's pompous rendering of a historical era I hold very dear, through my own studies and multiple mediums of entertainment.

Crime Always Pays... serves as a tightening of the ship's roster, and a more involved stake in high seas robbery. At 53 minutes, with only 16 tracks this time out (the least of their albums to date), they have honed in on some more ambitious compositions. You still have rampant, rum funneling exercises like "To Steal a Life" or "Power Keg", which crash forward with abandon as they weave pistols and blades through melees of faster thrash with breakdowns, gang shouts and even a 'yo ho ho' for good measure. But you're also in line for a more substantial plunder in "At the Bottom of a Glass", a nihilistic melodic death/thrasher that lyrically delivers more than one might expect, as if the band suddenly takes on this serious, thoughtful tone, which is very much unexpected, but welcome all the same. "Where Victory is Penned" is also acceptable, the band's usual mix of mosh pit violence, hardcore and death metal vocals with some rather elegant, dire melody snaking through its core.

Swashbuckle continues to incorporate the use of the traditional folk-inflected piece, and this time out, better than ever, evidenced by the lush "Of Hooks & Hornswogglers", the sad and proud escalation of "Slowly Wept the Sea", the ironically uplifting finale "Rope's End", which is naught but guitars, drums and the flavor of mood. There are still a few goofy double entendres, like "You Bring the Cannon, We'll Bring the Balls", or "Surf-N'Turf" (For Piratical Girth)", but the former is a pretty passable blitz of forward thrash, while the latter is not an entirely sucking tribute to the buffet table. I could probably have done without the Sleazy Martini-like stripper segue in "The Gallow's Pole Dancer" that leads into the breakdown, but it at least teases us with a grim humor. The material also seems to incorporate a little more genuine nautical flair here, as in "A Time of Wooden Ships & Iron Men".

You'll have to forgive me if I'm over-inflating the value here. Crime Always Pays... is hardly worth running out to purchase, and still seemingly sub-par to another band involving the rhythm section (Helcaraxë). If you seek pirate themed metal you are still best served by Running Wild's discography from about 1987-1995. But at least this effort shows some actual effort, and Swashbuckle have transcended from 'that band who write decent shanties and dress in pirate costumes but write vapid metal music' to 'that pirate thrash band with a decent lick or two'. I feel like they've a clear distance to sail before they've got evolve some fortitude beneath their belts, or some worthwhile ideas beneath the tricorne, but this is the first album which didn't smack of stale coconut on the tongue, or salt water in the lungs, and for at least a few moments, both hands clasp the helm.