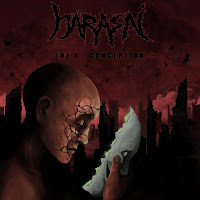 The melodic death metal genre suffers from a few distinct problems, not only in the actual craft but in the narrow perception of such huge swaths of the metal public. Many have ever viewed metal music as a distinctively negative realm, though some of its most famous genres like heavy and power are almost unanimously uplifting. Since the most successful melodic death metal acts out there are chalk full of rampant positivity, or at the worst, a beautiful manifestation of sadness, they seem to inspire a lot of malice from those who solely engage the more vicious and brutal identities of the form. There's also the matter of so many 'melodeath' bands crossing over into the metalcore territories, creating such cloying aberrations as Killswitch Engage which dominate record sales due to their suburban safety factor, while so many superior acts wallow in obscurity.

Harasai is not such a band, and they pretty faithfully retain the European countenance of a Dark Tranquillity and In Flames, with perhaps a slice of their German kin Night in Gales added to the cocktail. I'll be blunt: if you do not enjoy those artists, you will probably not enjoy this. The I-Conception is the band's debut, and it's a fairly honest approximation of the style, which steps very carefully around the obvious pitfall of the style: the inability to graft emotion and hooks into the songs. Take any monolith of this sub-genre, like a Jester Race, a Damage Done, or a Natural Born Chaos, and you'll very quickly notice the difference between those acts and hack rip-offs like Black Dahlia Murder or Beyond the Embrace: they've got fucking songs. Joyous and infectious songs, which urge your finger to hit the replay button time and time again for months, if not years.

The Germans Harasai, while not about to win an award for novelty, or change the minds of disbelievers, have apparently paid attention in class: they've got songs too! The I-Conception begins with a well written acoustic piece, "The Chosen Way", before jackknifing you with the surge of "...Into Oblivion", which blasts into existence with a wall of drums and melodic force, In Flames-like guitar licks dancing across the crested waves of rhythm. It's not exactly a trail blazing piece, but a strong start, and the band once again summons up the Swedish comparison to In Flames/Dark Tranquillity with the more steady rocking of "A Constant Disbelief". Here you get a taste of the cleaner vocals hovering in tandem with the death barks, and there's a pretty good bridge riff. "Silent Murder" is stronger still, with a lot of crunch and bounce to it, the guitars flying across in patterns of glory and sadness.

To their credit, they keep up a very consistent level of quality throughout all the writing, and that's more than I can say for so many bands who dwell in the shadow of the genre's titans. "The I-Conception", "Hour of the Dead Eyes", and "Spearhead of Storms" are all very likely to remind you of that vital energy which so drew you to the definitively Swedish sound in the first place, and the band don't just offer a single melody and duck or cover, they stay on pace and carefully distribute the strands of catchy bits through verse, chorus, bridge, and back again. They've all got talent on their respective instruments, and though he might occasionally mirror one of the better known singers like Mikael Stanne or Anders Friden, Martin Wittsieker is never once annoying on the entire record. Even in the rare case that he uses a clean tone, he doesn't disable himself with pop/emo bullshit: he's all power, all the time.

Obviously, there are areas in which Harasai can improve themselves. They've got the fire, the energy and solidarity, but it would be good to hear them branch out a little, drifting away from In Flames or Dark Tranquillity as primary influences in their guitar fills. The better riffs here, like the opening to "I-Conception" itself, are those that deliver a mildly unique taste, and a lot more of this will go a long way towards distinguishing them in the ailing genre which is now clearly the hunting ground of Finnish groups like Insomnium. The production also feels a little too sterile: the guitars have clean and powerful tones, but the combined effect falls very close to the past works of their influences. Still, if you're a huge fan of the Gothenburg style, and always seeking out others who execute it well, Harasai should be added your short list, because they manage to overcome any derivative delusions by staying on course and never stinking up the track list.