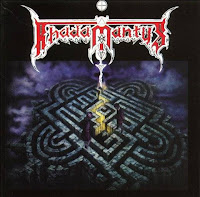 Rhadamantys were another Dutch death metal act unafraid to approach the genre from a very different angle, placing them in the same strange expanse as Creepmime, Phlebotomized and the 90s efforts from the mighty Pestilence, but stylistically there is very little here that you'll find in common with any of those. Their sole album, Labyrinth of Thoughts, is a rather unique accumulation of new age, world music, progressive rock and spurts of death and thrash riffing that, while aggressive enough, rarely ranks above the level of brutality found on a Spheres or Testimony of the Ancients. In fact, this album is so strange that its album titles is all too appropriate, for surely some amount of schizophrenia or confusion was possessing its makers at the time of composition.

Opener "Saxum Tanali" transports the listener into some lush, tranquil space upon which the hints of impending doom encroach at a mild distance. Birds chirp from the eaves of the rustic vegetation. Acoustic guitars pluck along like an elfin folk waltz. Percussive claps sound in the distance like hearing a construction site from over a neighborhood hill, the toil being carried on the winds. A mix of clean, heavily accented melodic vocals and deeper, manly narration play on the listener's attention span, gripping it for whatever might happen next: "Source of Our Intelligence", which begins with sailing, folk like clean vocals over some coiled chugging and the continued escalation of keyboards, until late in the track when the band breaks into a charging blend of moody thrash and vocals that seem like a scatterbrained addendum to Pyogenesis. The band choose an appropriate sample from Hellraiser II: Hellbound to close the track, and then we're assaulted by the dripping water and synthesized ambient world music of "Cryptical Evidence", which eventually trips into a more aggressive, taut melodic death metal sequence somewhat recollecting the more experimental Pestilence, or Cynic.

Questions, questions, darken my clear vision
Suicidal desecration of my inner strength
Explore your ambitions or accept the beauties of death
So that no more distinction of good and bad is needed

The latter half of the Labyrinth of Thoughts is somewhat less perplexing, because the band lays on more metal, and it is here you will find most of the better riffs. "Inner Crisis" is rather brief and direct for Rhadamantys, just about a minute and a half of progressive death/thrash that will indulge fans of such acts as Atheist or Creepmine, before it returns to an exotic wilderness ambient sequence over which minimal guitar leads wail. The storming that heralds "Unknown Worlds in Collision" cedes to what might be the single most magnificent piece on the album, with some explosive, excellent guitar riffs, solid bass performance and tribal warfare drumming, not to mention the exotic leads that slice through at seemingly random moments. That was over 8 minutes long, and the following "Pile on the Agony" is over 9 minutes, following the same brand of mystic and experimental death metal structuring that make the entire experience unusual.

Clearly, this effort deserves some credit for attempting to expand the very parameters of what the death metal genre might inhabit, though it is not without a few flaws. At times, the band's unusual ministrations seem so random and poorly plotted that the constant stops and starts can verge on annoyance. Their riffs, while well written, are not always highly memorable, but they are thankfully reinforced by all the new age segments, clean guitars, pianos and so forth. The vocals are largely intriguing, but several of the cleaner tones are shaky enough that they might have been re-edited, or clipped altogether. Still, Labyrinth of Thoughts succeeds to an extent that it should be heard by any devotee of demented death, whether the band's own Dutch peers or the more adventurous US bands of this period.