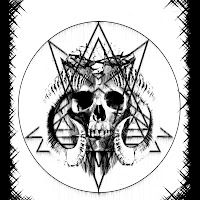 Annihilation through anonymity. Nuclear strikes from an unknown shore. Thus is the mandate of Valoton, one of the latest signings through the Finnish label Hammer of Hate, which gives us the only true hint as to the band's location and possible membership, but you can be sure they've got some measure of experience in this ghastly field, because they hit like a hundred megaton warhead from not the sky, but the fiery conflagration of the abyss, and debut Beastificate should see them launched into the ranks of the fast and ripping rank and file of extreme European black metal that includes 1349, Setherial, Marduk, Katharsis, Dark Funeral and Infernal War, where the need for speed so often strafes the inclement savagery of occult revelations.

That is not to infer that Valoton provide only some mindless blast fest, because in truth they are quite the dynamic aggressor, with a lean towards virile thrashing rhythms that crush and cavort through any tempo. However, the majority of this record is thrust past us at a bewildering pace, which is acceptable when they are so adept at keeping the riffs interesting alongside the drum battery. Rarely will this band tear out some generic stream of repetitive necrotic chords, and tracks like "Cut the Chains of Flesh", "Sancta Scientia", and the storming "Avatar", which is so fucking effective that I thought a dimension door to WWII had suddenly opened in my very neighborhood, and rushed to take cover from the incoming artillery shells. Yet, there is an incessant, toxic majesty to the proceedings here, an escalation of purpose and villainy that often haunts the slower fare like the bridge of "First Rays from Satan's Sun" or briefly bisects "Jaws of Abaddon" that prove the band can conquer on all rhythmic courses.

Beastificate is fresh and bloody sounding, like an open wound that is repeatedly stabbed to prevent any coagulation or clot. The vicious guitar tone is perfected here to shift between the onslaught of razor chords and the cleaner, melodic variations, and the clean guitars, mantra samples and percussion (as in the interlude "Beatific Visions") are all crystalline and gargantuan. The bass takes a little bit of a back seat, but it's still in there, and the vocals horrifically cast their foul glamour over the precise mess beneath. Those impressed by that blasting black metal which manages to keep its cool under fire, never sacrificing quality of riffs just to keep pace with the drumming, might find a new hero in Valoton. Their technical qualities and precision may put them at odds with most of the more disgusting, atmospheric simplicity of the Finnish scene (i.e. Horna, Barathrum, Satanic Warmaster, etc.), but this is a fairly magnificent debut which doesn't seem to grow dull through repeated exposure.