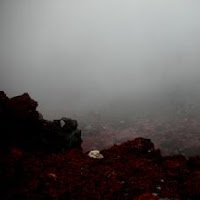 Castevet is another of the Profound Lore family of bands that I've heard quite a lot about in the past year or so, talked about in the same circles that adore Cobalt, Ludicra, Krallice, Altar of Plagues, and Agalloch, but I was quite surprised to find that there are some relatively local New England connections in the band: drummer Ian Jacyszyn once played with Boston brutes Pillory, and guitarist Andrew Hock was in Ehnarhe (later Biolich from NY). Joining them is Joshua Scott of the sludgy Anodyne and death grinders Defeatist. Here, the trio step out of their comfort zone to perform a spin on the black metal genre, and like several of their label mates, they incorporate a lot of dissonance and atmosphere into their writing.

Don't expect corpse painted ghouls leaping at you from the woods here with mock blades in hand, but a cacophonous clamor of modernism. This is clearly not traditional for the genre, and you can hear the band's various sludge, grind and math metalcore influences creeping into the various compositions, not to mention the sheen of unapologetic, aggressive post-rock or post-hardcore that dominates the most potent moments of "Red Stars San Chastity" or the swirling progress of "Grey Matter", which is easily one of my favorites on the album, like a mix of Enslaved's Vertebrae with some Voivod. "Stones" is another highlight, with an excellent sequence of chords that simmer, rise and fall through waves of temperamental discord. At times, the chaos does truly manifest much like an archaic 90s metalcore album (think Converge or Coalesce); you know, back when that style was actually worth something.

Castevet deserve some credit, though, for never letting the mix of influences become too frontal or annoying, and as they thread their needles through muted palettes of emotion, dynamic grays that hover at the edge of monotonous living. The vocals are more leaden than the rasp you'd come to expect out of black metal, and I'm not sure I care much for them, since they often feel a little too shallow for the more poignant expression of the guitar chords. The band seems to function best when they shiver off into caustic climes of incessant, streaming melody, whereas their blunt post-thrashing segues (i.e. "Red Aura") feel uneven. Like many of the Profound Lore bands, perhaps this NY trio might suffer from a little bit of undue hype (no fault of their own). The music is interesting, but not memorable. They'll definitely hold some appeal to fans of Krallice (one of whom recorded this album), and I'd also draw them to the attention of anyone who enjoys the band Tombs.