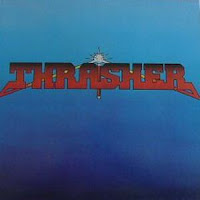 Almost like a ghetto Hear'n'Aid, or a precursor to European mash ups like Avantasia and Ayreon which seem to thrive on the guest talents they are able to acquire for each album, Thrasher was a project created in 1983 by drummer Carl Canedy of The Rods, and Andy 'Duck' MacDonald of the heavy old rockers Blue Cheer. The aim here was well-intentioned, to showcase a large host of lesser known metal personalities like James Rivera (Helstar), Dan Spitz (Anthrax), Billy Sheehan (Mr. Big, David Lee Roth), Jack Starr (Burning Starr, Virgin Steele), Rhett Forester (Riot, Masi, etc) and numerous others, many of whom were kicking about the Combat roster and related labels in the early to mid 80s.

Somehow, after a few years, the project came to fruition in Burning at the Speed of Light, but it does suffer from a number of problems that would hold it back from, well, anyone giving a damn. For one, the moniker 'Thrasher' was an unfortunate choice, surely a word in the English language already, but unfortunately timed as the thrash metal genre was already off and beginning to explode, leeching away some of the success from the more traditional power/heavy metal acts who sounded sort of like...Thrasher. So naturally, anyone picking this album up at the time (like yours truly) might have been misled by their own ignorance into thinking they were picking up something that would kick some ass, like all that fresh Slayer and Metallica they were so into at the time. Some of these people might have, well, done damage to their vinyls and cassettes when discovering what this really was. Another thing, the cover art sucks...I mean truly, truly possesses me with the inclination to hurl. You gather all this talent, put some honest effort into stitching together something like this, and then put no effort into the cover? The fuck?

Now, as for the material itself, it's not exactly terrible. This is average power/speed metal for the time, and if you shut down your expectations, you won't come away thinking you've been robbed blind. Vocalists like Brad Sinsel (TKO), Rick Caudle (a friend of Canedy) and even Dan Beehler (Exciter) do their best to rip it up while musicians are given chances to mix it up with solo segments (as in "Widowmaker", where Sheehan and MacDonald start noodling away). The title track even has like 5-6 guitarists shredding off, but unfortunately it seems like so much blind indulgence being forced over a stack of mediocre tracks. A few of the songs are simply beyond cheesy, like "She Likes it Rough" (with what sounds like an embarrassed Rivera?) and "Black Lace and Leather", which is pretty bad. Rhett Forester's vocals on "Bad Boys" are also truly cornball, and the fact that most of the rhythm section sound like they're jamming off at a bowling alley in 1982 doesn't really help matters.

Thrasher was all made in fun, but to think that something positive might have been borne from this if the songs were actually decent and the creators had taken it a little more seriously. They must have been so stretched trying to pull it all together and manage their full-time bands that they had little concern for what they were actually hashing out. The result is a harebrained collage of metal cliches that has nothing on Canedy's main band, who performed in the very same style but had the benefit of cohesive vision and more cautious songwriting. About the only things that keep Burning at the Speed of Light hovering over the edge of utter suck would be the occasional worthy performances and the dirty, street metal production which is so hard to find these days. So what I'm saying is this: skip Thrasher, unless you've accumulated the cattiest of curiosities. Pick up any album by The Rods instead, and thank me later.