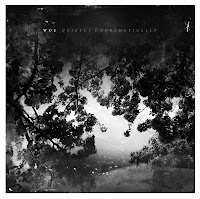 Oh, these clever bastards and their misleading album titles. Woe is the offspring of Chris Grigg's imagination, a man you might know as the new drummer in fellow US tyrants Krieg. A few years ago, he released A Spell for the Death of Man, an album he had written and performed all by his lonesome, which possessed the same hybrid of drifting and blasphemy that we come to associate from many black metal artists in America; not so different from a Thralldom, Cobalt or Krallice, but pierced with the stake of fairly lengthy, traditional compositions that were often heavy on repetitious blast beats. My reaction was that it was alright, but I had hoped he would venture forth into the more sonically included terrain of the chords he cast across the din of dull expectations.

With the follow-up, which is not so quiet or undramatic as its title implies, he seems to have developed along the lines I had pondered, and the result is a more dynamic, organic sounding album. Part of this is that he's expanded the band into a full, breathing entity, joined by several members of his other project The Green Evening Requiem, who are also in the rather lacking (in my opinion) Woods of Ypres. Regardless, this seems like a good combination to perform Woe's music, because they too dowse their more straightforward influences in the wall of sound that many of us seem to enjoy on these shores. Where it works, like the 8 minute title track or the scintillating "A Treatise on Control", we are carried off into an existential realm where darkness and sadness are weighed off, one never quite overshadowing the other. But not every song delivers the same measure of razor bliss, and the 13 minute "Full Circle" becomes a rather sodden bore after about a quarter of its playtime, and the afterthought "Hatred is Our Heart" has maybe one decent riff.

The sound is not so shining and cutting as its predecessor, but I do actually favor this prevalent, structural balance of highs and lows. The lyrics are emotional explorations of solitude and social castigation, with the sort of poignant and image-heavy lyrics that one might expect out of the melodic hardcore of the 80s, or maybe Katatonia; effective and fitting to the sounds, but rather faceless in their construction. The band is clearly doing something right, as they've created a stir in the underground and signed with hard hitter Candlelight Records, but I ultimately found Quietly, Dramatically to be another example of those USBM releases that fade almost instantly from my attention span, like Wolves in the Throne Room, Cobalt, and so forth. There are very few riffs of quality, most feeling rather tepid and disingenous, thus the contents are left to their atmosphere and emotional discourse to drag the listener in, and they fall a little flat. Not by any means a bad effort, but pretty average in the grand scheme of things that are, and things to come.