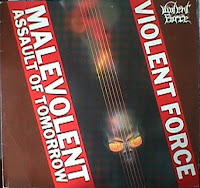 By 1987, German thrash metal was really anyone's game. Sodom, Destruction and Kreator had arrived, and classic albums in the genre had already unknowingly been issued, but even these bands were still ascending, developing their chops. Violent Force were formed pretty early on, in 1984, and after a series of demos, they managed to get this one album Malevolent Assault of Tomorrow released through the rapidly rising Roadrunner, before writing and recording a second (unreleased) album and disappearing in 1989. The band has recently reformed, after 20 years of vacancy, by guitarist Stachel and drummer Hille, but you have to wonder if it's really worth it...

The reason being that Malevolent Assault of Tomorrow, while not exactly terrible, was at best a composite of the band's more successful countrymen. You can clearly hear the Destruction and Sodom comparisons throughout, with a dash of Kreator and also some Tankard delivered in the no frills attitude, and certainly Slayer. The problem is that Violent Force just don't write songs as strongly as those other names. There is plenty of punchy atmosphere to the guitar riffing, and snappy drums that set a similar stage to a Sentence of Death, Agent Orange or Pestilence's Malleus Maleficarum. Vocalist Lemmy (not the one you're thinking of) lends an adequately aggressive element, his tone somewhere between Tom Angelripper, Tom Araya and Gerre, and the production of the album is deceptively dated.

If you hate old thrash recordings, you're unlikely to change your mind with the sound here, but if you enjoy the Teutonic touch of the mid-80s, it's honestly rather timeless. The drawback is that the songs just don't seem to hitchhike the attention span as violently as the other German works of 1986-1987. Little of the tireless, juvenile and jovial thrust of a Zombie Attack. None of the blitzkrieg barbarity of a Pleasure to Kill. Clinical, cold riffs that don't quite measure up to the scalpel slicing of Sentence of Death or Infernal Overkill. There are some raucous, rowdy pieces like "Vengeance and Venom", "Soulbursting" and "The Night" that send shivers of rusted, brutal antiquity down the spine of the genre's connoisseur, but the actual notation seems average, fuel only for the viral speed and exploding leads. A few tracks like "S.D.I." and the instrumental "What About the Time After" fare better, with more adventurous musicality, but even these become only vaguely distinct against the far better efforts of the period.

I'd note that there are actually two drummers on this album, Jurgen Hillebrand and Atomic Steif. The latter plays on only a few tracks, but would see more success in bands like Living Death, Holy Moses and Sodom. Lemmy and Steif would also join forces in another band called Sacred Chao, which was little more than a short lived exodus of several Living Death members. Otherwise, the rest of the Violent Force lineup has been pretty quiet in the metal realm, with Malevolent Assault of Tomorrow settling largely into the dust of obscurity (with a limited 2007 remaster and re-issue). I've not heard that remaster, but I can only recommend this to the most passionate of German thrash fans. The songs here go a long way towards evoking nostalgia for the style and place, but unfortunately they just don't have the lasting impact you expect from the Big Three, or other bands like Tankard, Holy Moses, Vendetta and Deathrow.