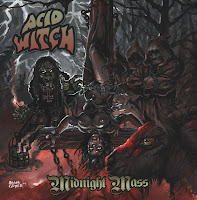 Midnight Mass is a 7" EP teaser to herald in the second coming of Michigan's Acid Witch, who released their fun debut Witchtanic Hellucinations in 2008, and another EP (Witch House) last year that marked a bit of progression in quality. The duo have moved from Razorback Records to Hell's Headbangers, another natural fit for their unapologetic, old school blend of crushing stoner riffs, classic horror and hypnotic PSA samples, and death/doom influences from both Europe and the States. If you can imagine a mash-up of Pentagram, Candlemass, Monster Magnet, Incantation and disEmbowelment, then Acid Witch has your ticket to limitless heathen burning and bong hymns.

Thankfully, Dave and Shagrat are not a bunch of snake oil salesmen, and the EP once again features exclusive material you won't find on their full-length. It's not exactly their best showing, and I preferred the material on the prior EP to this, but at the least it makes a swell collector's item if you're into collecting limited press records or nostalgic for this entire Hammer House inspired scene that has grasped the doom scene with its festering fingertips. The "Intro" is an extended sample dealing with the band's favorite subject: witch burnings, and then there are two new metal crushers in "Midnight Mass" and "To Magic, Sex and Gore". The former creates a simple, barbaric momentum, with playful organs drifting in below the weighty death growls and a pretty fun lead break, like a death metal Monster Magnet. I found "To Magic, Sex and Gore" to be the slightly better of the pair, with a great horror synth intro and then a big riff that almost reminds me of Metallica's "Sad But True" if it were played by Cathedral.

The production is as lo-fi as usual, but not so undercut that you won't revel in the mass walls of distortion that dowse the chords, or the slathered vocals which resonate all over the mix with both death grunts and black rasping. Musically, I can't say the value is high. Their newest album Stoned is loaded with songs better than these, and I can understand why the band would separate them. The riffs are not incredibly thoughtful or original, and despite the organs and classic lead sequences, they don't really offer much by way of ghastly, hidden delights. That said, the packaging is very attractive, especially the 'putrid' edition of the vinyl, and for these reasons, it's worth checking out if you are enamored of the band's morbid but colorful, comic book horror aesthetic. I love what Acid Witch is trying to do here, but I do wish the music would ascend to the level of the archaic visual imagery they conjure in their great lyrics and covers.