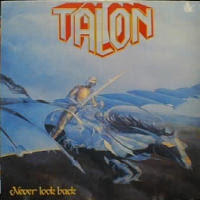 The knight who stood so proudly astride the debut Neutralized returns with a new, shining chrome dragon-horse thing, and one might think this mobility might transfer to the sounds of the band's music. However, at best, Never Look Back is just as heavy as the first album, only a lot less interesting. A new guitar player had entered the ranks, one Robert Bobel joining Uwe Hoffman (also the vocalist), and stepping in for Steve Hohenberger. Perhaps this explains the thicker guitar tone found on the sophomore, or perhaps not, but that's pretty much the only difference in style separating the two albums.

Otherwise, it's more of the same, with Talon once again setting themselves up with some of the better songs on the album. "Never Look Back" is another of those slower paced, fist banging anthems, with big chords and slight melodies, while "Defense Condition" blazes forth into speed metal territory, plucky melodies and a great verse structure. After this, I felt the album took a dive in quality. "Murder Mile" is not so interesting, and "Lost in Reality" becomes the moody, forgettable power ballad, though the lead in the latter is well done. "Diamond Cut Diamond" and "Save Your Breath" return us to iron pumping prominence, but neither is all that memorable, nor is the fast pounding anthem "Running Through the Night". I do quite enjoy "Venomous Gods" and "Call It Arsen", and wish they had been shoved towards the fore to improve the album's initial impact.

Never Look Back is not a poor successor to Neutralized, but it ultimately would not increase the band's stake in the game, and it is in fact the worst of Talon's catalog. Die hards of all things German and heavy metal, that dwell blessedly upon the bliss of Accept, Scorpions, Bonfire and lesser known acts like Samain would probably lap this up, at least the finer bits. Uwe Hoffman still sounds great at the helm, his last spin at the wheel, but this record really just fails to send the band sprawling over the walls of obscurity. The songs lack the desired level of emotional bite, and the chorus parts are rarely memorable. Worth a listen only if you're obsessed with Neutralized, or one of the many similar bands spewing forth from Europe in the mid-80s.