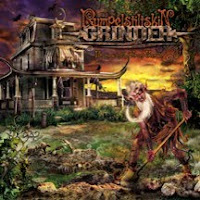 Rumpelstiltskin Grinder are a fairly perplexing act that arrived right on the leading edge of the modern thrash retrospective, but they've got little to nothing in common with most of the mediocre 80s worship nerds. Granted, there is clearly a huge influence from both the chunky power of Bay Area thrash and a hardcore saturation that owes a little to say, Demolition Hammer or the NY crossover bands like Cro-Mags and Crumbsuckers, but this is flavored with a little edge of technicality, a tiny trace of death metal. Add to this the curious but attractive cover art and the band's bizarre name and it fills a rather unique niche: demented fairy tale thrash? The lyrics expand upon this, of course, often covering such subjects as military hardware ("Ode to Tanks") and government conspiracies ("Stealing E.T."), but they're always engaging some medium of cryptic silliness that make the band a little hard to take seriously, and I'm sure they don't want you to.

Whether or not this is welcome, of course, depends on whether or not you find the band's sense of humor actually funny. I do not. It feels like we're not always in on some inside joke, or like some spastic internet memes given audio flesh. Thus, for my own enjoyment, I had to rely entirely on the band's musical skill and composition, and here at least they do not completely drop the ball. "Stealing E.T." presents some hammering, schizoid thrash, and there are a handful of brazen sub-tech rhythms and a flighty but frenetic lead sequence which certainly deliver, though they seem encapsulated in less interesting fare that does little but drive the mosh pit. "Orange and Black Attack" has a worthwhile opening trot, like a less intense Dark Angel or Demolition Hammer, but then throws this away on a dumb chorus of 'No, we're not fucking around' which threatens you from a pretty boring, typical thrash riff.

There are several other highlights like the bustling lattice of woven, muted melodies that inaugurates "Grab a Shovel (We've Got Bodies to Bury)" or the thumpy bass and melodic slicing of "Unleash the Troll" which veers towards a more technical black/thrash territory, but even these are not entirely solid or memorable in the greater context of their combined riff qualities. "Grinder" is basically a melodic death/thrash piece which, while vivacious and sprightly like the Swedish overlords, with a chugged/arpeggio trade off during the bridge, but nothing here seems to attract the attention after a listen or two. "The Day Merman Met Todd 'The Harpoon" sucks aside from its exotic bridge. "Let the Fools Cheer" has some worthwhile if annoying guitar lines, but the splattered bark of the vocalist seems to clutter the composition, and "Ode to Tanks" opens with a grievously dull rolling hardcore/thrash mosh rhythm that continues into the verse like we were listening to Earth Crisis with a different vocalist. It grows more interesting as it proceeds into warlike, melodic thrash territory, but still forgettable.

With a bit more emphasis on its apparent strengths in musicianship and a few less cloying, dull breakdown segments, Buried in the Front Yard might have been a decent debut of modern thrash that kept one eye forward with the other on the past. The guitars are very chunky, and they seem a little off balance with the leads, though the muted melodies the band are constantly inhabiting sound bold enough. The vocals are appropriately vicious, somewhere between a Don Doty and Chuck Schuldiner, but upon any examination of the lyrics, they quickly lose their edge. It's ironic, because not all of the prose is necessarily terrible: the subject matter might be folly, but Rumpelstiltskin Grinder have put at least a little thought into it, and since they've done the same for just about every element of the music, it deftly manages to avoid the Pit of Suck.