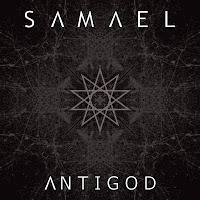 Even though its quality would not match some of the band's heights, it was good to hear Samael return to a more aggressive form with their latest album Above. Sure, it tended to suffer from some sameness in the compositions, and wouldn't exactly earn the Swiss veterans a new audience, but it was nonetheless a potent statement that the band had not forgotten where they had originated, without abandoning the electronic urges that have driven them for the past 15 years. Antigod is an EP and fan package with a mix of the old and new, and though it ultimately has little appeal to those who don't feel like supporting the band with a few hard-earned dollars, there is at least one thing here worth being excited for...

That one thing is "Antigod" itself, which is the closest the band have come to their masterpiece, 1996's Passage, which must be hands down one of my favorite metal albums ever. Dark and martial synthesizers congregate behind a chugged cosmos of thrashing guitars, a procession of ghastly infernal worlds soaring past the psyche much like the band's classics. Granted, it's not got the chorus of a "Shining Kingdom" or "Jupiterian Vibe", but it does conjure that same sense of wonder. There is also a pure industrial alternative to the title track called the "Dark Night Mix", which isn't bad, though it does not demand the same level of attention as the original. Long time fans will be happy to see that the band have re-recorded "Into the Pentagram", from their classic Medieval Prophecy EP, giving it the same modern, atmospheric spin as their recent efforts. I'm not sure if pundits will take pleasure in it, but it does function to an extent.

So as not to ignore the past decade, the two live cuts included both draw on their 21st century material: "Reign of Light" from the album of the same name, and "Slavocracy" from Solar Soul. Naturally I'd have preferred something from Ceremony of Opposites or Passage, but I'll have to admit that both of the tracks sound pretty solid in the live setting, and I can sense a conjunction and consistency with material from the mid 90s on. There's one other track included, a sinister epic Xytras piece called "Ten Thousand Years" which will likely thrill fans of his instrumental alternative Passage recording, and essentially a Castlevania soundtrack from space. In all, there is a fair amount of value here for any diehard, but the centerpiece is clearly "Antigod", and if this marks some regression back to the band's brilliant career eaves, I'm all for it.