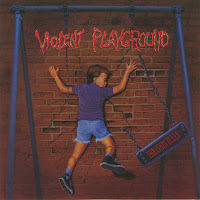 When the leading gimmick for your debut album is that it's called "Thrashin Blues", opens with a song called "Thrashin Blues", which is nothing more than a slide guitar intro interrupted by a mediocre thrash metal riff with awful vocals and lyrics, and a steppin' blues breakdown, then you're already in a spot of trouble. In fact, I don't think there's a snowball's chance in hell for redemption, and the remainder of the sole Violent Playground album reinforces this hopelessness through a veritable who's who of flaws, 37 minutes of awkward and astonishing misery that not surprisingly got the band absolutely nowhere.

Yes, while West Coast and European bands were plugging away hard, writing expansive classics of the genre with tremendous talent and serious attitude, we could always count on most of our New York thrash bands to spend their time instead fucking around, as if they were going to be the next Anthrax circa "I'm the Man" or "Caught in a Mosh". Most prominent would be M.O.D., but at least they would rip out a half-decent riff from time to time. I'm not inherently opposed to something humorous or entertaining in my metal, but Violent Playground, whose career consisted of this sole album (thank any god you worship), simply are not and never were funny. "Thrashin Blues", "I Hate My Boss", "Doctor Feelfine", "Lame from the Neck Up", and "Mr. Dandy" are not intrinsically funny amusing concepts, not even in 1988, and thus Thrashin Blues has only one shot at tickling the memory glands, through its music...

Well, the music almost unanimously sucks. Occasionally a tune like "Doctor Feelfine" will rip out a half-decent attempt at generic speed/thrash guitars, but too many of the compositions suffer from a feeling of lame, punkish abandon. More often, the songs are simply destroyed by the vocals of 'Manny', which are basically lame East Coast foolishness with the occasional annoying scream or a slightly more acidic bluntness which is better served in the crossover genre. Take "Mr. Dandy", which has the glean of a decent melody at its intro, then rushes into aggressive thrash metal and is vomited all over by the miserable vocal performance. Even where busiest, in a "Play to Kill" or "Lame from the Neck Up", where guitarists 'Rocko' and 'The Son' do their best to smash out some mildly entertaining speed metal, the writing feels clumsy and in need of further gestation. At best, the band can pull together an "Anvil Head", where the gang shouts and precision punishment almost offset the wimpy screaming to feel like a dirtier alternative to Exciter.

Compare Violent Playground to another silly East Coast band of their day like I.N.C., and you'll see a huge difference in the quality of the writing. Where such a band got away with their general goofiness by writing riffs that rattle around in your skull chamber, this one sadly suffers from a bit of the bandwagon, an an overinflated sense of their own comic value. As sorry as such a record as Thrashin Blues is, it's also shameful, because clearly the rhythm section is decent and the guitarists try pretty hard to thrill (as we learn through a bombardment of pathetic leads). But under the class clown tutelage of this vocalist, and with such horrendous production and no appreciable songs of note, this album was due for the bargain basement bins before it was ever pressed.