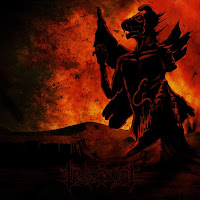 Staging quite the career comeback, Nazxul exploded with last year's Iconoclast, which simply put was flawless; one of the finest examples of symphonic black metal I'd heard since In the Nightside Eclipse. Since that time, the Australians have had some live gigging around the world and begun to build their brand among devotees of well written, intelligent black metal that shunts excess technicality and progressive for the sound of pure hellfire, a juggernaut of scouring flames and licking malice that screams epic from the leviathan's lair. To celebrate this momentum, Nazxul have released a two-track 7" EP that they distributed on US dates only, which features one non-album track and a cover.

Unfortunately, the best I can say for "Quickener of the Dead" itself is that it provides more of the same that we experienced on Iconoclast. A brooding, metamorphic growl heralds a vortex of savage, straight riffing glazed in synthesized, symphonic architecture. Almost the entirety of the 5+ minutes is delivered with the same leaden brutality as a "Black Wings" or "Iconoclast", and there is no transformation of note until the closing two minutes, which cut pace into a majestic, sweeping atmosphere that we might have done with earlier, then gather speed once more to the repetitious ballast of the track's bulk. The other piece included here is a cover of Beherit's "Gate of Nanna", from the Finns' 1993 album Drawing Down the Moon. It's performed with the thick and riveting force the Australians bring to bear on their originals, but otherwise there is simply no compelling reason to listen to it against the original, simmering vocals and all.

Quickener of the Dead has a fine cover image, better than Iconoclast in fact, and it was a fair means by which to toss the band a few dollars as they passed through your town, well, until they ran out of copies, which I assume mustn't have taken long. There are no repeats here from the full-length, thankfully, but the title track is simply not as powerful as anything from that opus, and I can hear why it wouldn't have been included there. The cover song provides little more impetus to track the 7" down, so this is placed squarely in the realm of the record collector, well wisher or fanatic of the band. I certainly hope that "Quickener..." is left to lie here, since they're an amazing band capable of far more. I'd loathe that their next studio full-length be polluted by such measures of mediocrity.