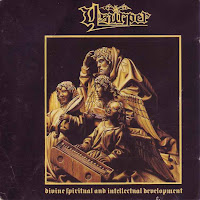 It might be telling that the very best of the Dutch thrash bands were those that rapidly made the transition into a death/thrash hybrid, and then often into full on death metal. Pestilence, Thanatos, Dead Head all need no introduction, but there were very few bands that stuck with the initial genre and met any kind of success. Groups like Mandator are often cited as having some relevance, but I'd disagree there, as their efforts were naught but wishful mediocrity. For this reason, a band like Usurper is a pretty rare find, a group that actually started off as a death metal act (two of the members put out a demo as Sepulchral Death) and then evolved into a pure thrash act. Divine Spiritual and Intellectual Development was their only full-length before the band would become extinct and the mantle of Usurper would be passed in the underground consciousness to the better known Chicago band.

This Usurper, however, had a sound not unlike most of their contemporaries of the day, in particular Metallica, Metal Church, Possessed and Testament. I mention the last two primarily for the vocal comparison, because Patrick Harreman had a fairly similar, sinister voice to Jeff Becera on Beyond the Gates or The Eyes of Horror, or Chuck Billy on The Legacy and The New Order. The riffs, on the other hand, feel like a mix of inspiration from Kill 'Em All, The Dark and earlier Destruction albums. A pretty direct equivalent might be England's Xentrix. There's nothing particularly standout or unique about Usurper, and their compositional skills were average for the day, but they do draft a number of effective bridge burners here like "Egoistic Mind", "Insane Decisions", "Infest the Convent" and what might have been considered a 'controversial' piece for the time, "Behind Mandela's Mask". "The Room" takes on a more progressive taste, if only for its constant noodling, and there are a few average bits like "Diseased Reality", but it's pretty strong throughout.

What I actually enjoy the most about this album is the production, with its airy, powerful guitar tone and reverb-strong mixing. They give it a timeless draw, almost like Testament's divisive album The Ritual (my personal favorite), though Usurper is more directly thrash, with few nods to pure heavy metal that the Bay Area band would throw in there. The band rarely shows off anything beyond the basic riffage ("The Room" and a few other leads excepted), and if a fair criticism can be made, it's that they were simply not ambitious or catchy enough to ever land a chance against the better known European, Brazilian or US thrash bands. But despite its lack of overachieving personality, Divine Spiritual and Intellectual Development is quite likable, doesn't seem to age all that much, and is adequate when I'm seeking a pure late 80s thrash fix sans the ambition of their betters.