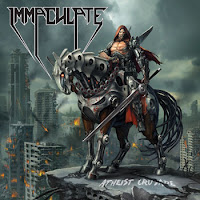 When I first saw the cover art to Immaculate's sophomore effort Atheist Crusade, I realized I was either going to really love it or truly despite it. I had heard the Swedish band's previous effort, Thrash, Kill 'n' Deströy, and found it quite forgettable. Also, the song titles here include "Thrash Metal Avenger", "Gutterthrash", and what might be the most lame, "Thrashark". Thrash fucking shark? Why must this, perhaps my most beloved of all metal styles, be reduced to such foul humor in the 21st century? Yes, the tidings for the Atheist Crusade were grim indeed, but against all odds, something wild occurred: I started to jiggle around in my flesh, rattle around in my brain, and ultimately I developed an appreciation for it...

The reason being, that Immaculate are one of the most spastic technical thrash bands out there, with screaming vocals that conjure up comparisons to Realm, Toxik, or Watchtower's debut Energetic Disassembly. Mike Eronen has a shrill, piercing voice that could easily slice vegetables, and perhaps most meats, were it marketed on infomercials for $19.99 plus shipping, and the frenetic blitz created by "Nino Vukovic and Fadi Ghanime" through tracks like "The Immaculate Dead", "Sanity's Eclipse/Steel of the Missionary" or yes, sadly, even "Thrashark" itself. Perhaps the best modern comparison would be the hot commodity of Vektor. Take that band's higher pitched, shrieking frenzies and create an entire album out of their flesh ripping psychosis, and you arrive at Immaculate. Granted, they don't have the songwriting skill, and basically just level you with rapid fire riff after rapid fire riff, and little lyrical strength, but if you're in the mood for something bewildering and complex, but still purely thrash, then you've signed up to the right club.

Atheist Crusade is not exactly perfect, but I feel like almost every original composition has its share of exciting riffs. The band also includes a cover of Fates Warning's "The Apparition", for a few added scene points, and it marks a striking contrast to the rest of the album, since they don't ever decide to break the hyperactive speed barrier with it. It's at least a brief respite before you are assaulted with the screaming madness of "Gutterthrash", during which you'll spend 50% of the time laughing, and 50% of the time losing your hair to the manic and scattered riffs. Wrap all of this up in a crisp guitar tone, with snaking melodic leads and you've got a noted improvement over the Immaculate debut, and one of the most head-spinning thrash speedster combos you're likely to hear in the wake of Vektor.