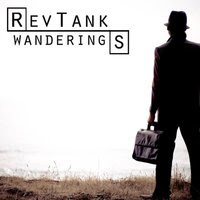 Wanderings is something of an anomaly to arrive here at the offices, a duo performing an interesting blend of psychedelic and progressive rock elements that are both adventurous and accessible, rugged but refined, with a pool of influences so wide that one could never swim from one end to the next without motorized assistance, or at least a good pair of flippers. Well outside the comfort zone of my concave, metal battered brains and tastes, right? Okay, so it's really only one office. Actually, more like a desk, a PC, and a pile of promo CDs, .mp3s, various expended juice boxes and an inflatable footman's flail. But I wasn't exaggerating about Revtank: these gentleman are firing up an enormous balloon of potential, floating off to discover what lies beyond the cloud-lines of simple categorization.

I can offer references, but they in no way could honor or complete the range of this experience. I'll throw Porcupine Tree out there, or Genesis, or Pink Floyd, or modern Anathema, or the Beach Boys' wonderful Pet Sounds, or nearly any other expansive challenge to the security of convention. This is a vocal group, and the emphasis is very often placed upon the soaring words as a vehicle, like if Fleet Foxes weren't afraid to come down from their mountains, dip their feet in the ocean, or stare into the oncoming traffic on a highway. But there is just as fundamental of a support group in the music itself, and this is where the band unleashes staggering levels of variation, from the churning, steady pianos and stubborn electro fuzz that carry "Quietus" like an Atlas of sound, to the Floydian organs and blues of "Loaded as a Gun", to the space warp of "Remember Soldier" which erupts into whip-tails of distortion and dementia like an acid-wagging tongue.

All of this is fascinating, but the real strengths of the album do tend to be hidden near its aft, namely the stunning "Eleven Eleven" or the blissful, atmospheric tone prose of "Such Were the Joys". Both of these tracks are examples of the band turning their talent well past 11, well past the well meaning but often jilted compositions to come before. Both are better than most of the disaffected, post-rock organic hash that currently pollutes the tradewind buzz of popular media. Both dealt a more loving, expressive, professional palette than their neighbors, where a "Seasons Changed" or "0513" only hints at brilliance. Thus, the Wanderings might not seem so complete, the listeners attention span being drawn in and then snapped out like an elastic through 50+ minutes of dense exploration in the guise of acoustic an electric guitars, pianos and synthesizers, deep and high pitched vocals and subtle shifts in percussion.

The other snag might be the production, which seems a little too muddied up front ("Quietus" and the shambling electro and metal traces of "Voices"). This is obviously not some huge budget at play, but the not yet spent creative juices being applied to immortality through whatever home recording equipment is convenient. That said, there are spots in which Revtank will truly fool you, because "Eleven Eleven" and "Such Were the Joys" probably wouldn't sound much better if you dumped 50K on them. But the heavier guitar tone used on a few of the tracks is in need of some refinement, and often an acoustic line could also benefit from more volume against the swagger of the pianos or the sheer, wind-like ambiance coursing through the album.

All said, though, Wanderings is clearly a work of much effort, and unchecked inspiration. Where the duo might lapse into excess Pink Floyd or Porcupine Tree territory, they are quick to remedy through the unexpected sounds that take shape. If I were to associate this album with one of the four prominent elements, it would be air. Like the gentleman on the cover, the songs make you want to stare off into vast spaces, fulfilled by their emptiness, collapsed to the static inferiority of the human skin prison. This is well and good for 30-40 minutes, but at some point, I'd like to hear their take on earth, fire and water, and I hope as their ideas for this project continue to evolve, they'll smite us with more than just a steady breeze. Until that time, I think you'll find that there is still enough sky here to lose yourself in.