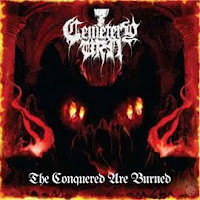 Congratulations to yet another band who somehow manage to evoke the primacy of early 90s death metal without entirely adhering to the trends of Incantation and Swedish worship. Alright, to be honest, you can hear a little of both here on the Australians' second album The Conquered are Burned, but there's also a very natural aggression here that measures off its grinding bursts of intensity with vile, twisting tremolo rhythms that recall what so many of us loved about Death, Morbid Angel and so forth. Perhaps I shouldn't be so surprised at the results, since D. Bloodstorm and A. Gillon have been involved in seminal atrocities Abominator and Bestial Warlust, but this is easily among of the strongest material they've produced.

Speaking of Bloodstorm, his vocals are perhaps the biggest treat on this album, callous and downcast and smothering the ground meat of the guitars with guttural abandon somewhere between Craig Pillard and Martin van Drunen. The guitar tones harvest their morbid autonomy from the raw force of a Repulsion, Napalm Death or Bolt Thrower, but the compositions duck and weave through a dynamic range reminiscent of old Carcass or Cadaver. They're also not above throwing you into the expected, like the slow crawl that "The Plague of Annihilation" devolves into during the bridge, or their efficient taste in leads. Personal favorites here include the rampant "Bloodied Death Curse" for its wastewater, fluid intro riffing, of "Possessed Terror", which is simply a romping, stomping pit of grooves that cycle into blast territory like they had just escaped Symphonies of Sickness, and one of the best solos on the disc. Closer "The Conquest Are Burned" is similarly scorching and infernally blessed.

If Cemetery Urn has a weakness, it might simply be that in a few of the tracks, the constant forays of the guitars can turn up nearly as many dull riffs as they do winners. This isn't all that often, mind you, but there were points at which I noted to myself, gee, it's so cool that this sounds like Realm of Chaos, Horrified or From Enslavement to Obliteration. Next, please. On the plus side, the Australians have that 'next' lined up and ready to swing, so you won't spend much time reeling in familiarity or exhaustion before the next blitzkrieg sounds off in your skull. Certainly, they have a more exciting approach to this brand of dense, atmospheric material than many of the other new bands manifesting to transform death metal back to its cavernous roots, but they're not yet composing the stuff of legend that they idolize (or in this case, the stuff they helped spread like wildfire, down under in their previous bands). But black eyes are at least being served up here with not only combat boots, but a dark sincerity.