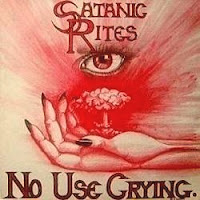 By 1987, there is no question that the world was moving on from the style of music performed by a band like Satanic Rites, melodic hard rock & heavy metal with very simplistic, driving guitars, clean as a whistle vocals and keyboard strikes used not unlike the softer rock on the radio. Judging by the slight decline in quality here from their debut Which Way the Wind Blows, it might be that Satanic Rites themselves were moving on, but don't let that dissuade you from tracking this down if you're a collector of NWOBHM, because there are still a number of quality songs here that number among the best they'd ever write.

There was just one lineup change here, the band picking up guitarist a new keyboard player Graham Dyson, and he has a slightly different set of sounds that don't come off as so optimistically proggish like some 70s reject. Then again, that's sort of what I liked about the debut, so it's a trade-off here for a more accessible set of radio ready pads. "Never So Easy" is one of the best of the lot here, with a driving, Priest-like fix in the guitars, and a catchy two-part chorus with some escalating vocals. "Borderline" should also get the blood flowing, as if it were some female alternative to Survivor's "Eye of the Tiger", and "Changling" sounds uncannily similar in places to the title track from the amazing 80s teen comedy Better Off Dead, though the lyrics are obviously covering different ground. Other scorchers include the Scorpions styled power ballad "Here Comes the War" and cruiser "Cast My Spell".

Unfortunately, there are a few notably weaker entries here that hold the album back from the joyous consistency of its predecessor. "Song for Stuart" sounds like a Rick Springfield reject, and the airy keyboard/vocal duo "Pain of Confusion" seems way out of place here, as cheesy as its environs might already feel. It also doesn't start off on its best foot, though "Good Times Now" is not necessarily the worst song here. Like Which Way the Winds Blow, the album has seen a re-issue in 2010 through Cult Metal Classics, with a pair of bonus tracks: demo version of "Never So Easy" and "No Use Crying", so those of you that have been searching forever for the vinyl, or any semblance of the original recording can now acquire it with relative ease. Satanic Rites would not continue beyond this album, which is unfortunate, because it might have been fantastic to hear the band develop into a heavier format in the late 80s/90s. As it stands, this record is a passable alternative for fans of Rock Goddess, Girlschool, Lita Ford and so on.