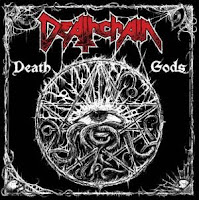 I'll be the first to admit that I was not expecting much out of this album, as my reaction to all of the prior Deathchain output has been lukewarm at best. Great band name wasted on a fairly average attempt at death/thrash. However, it might be best not to think of Death Gods as anything other than sheer death metal, because it's clearly an amalgamation of acts like Morbid Angel, Krisiun, Nile and Behemoth, only more potent thanks to its truly dark tones. Considering what a great job Corpse did with last year's Winterwolf debut album (Deathchain actually started as Winterwolf for its first two demos, then split off into a separate entity), perhaps I should not have been so completely surprised by the quality here.

The guitars are not only enormous sounding, like bludgeons from beyond the grave, but the riffs that they spit forth are quite intense through "The Crawling Chaos", "Scimitar", "The Beyond" and the thick chugging force of "We Are Unearthed". They're not always the catchiest, and that is perhaps the one fact holding this record back from a perfect score, but you will nevertheless feel each hammering chord like it were being played upon your spine. Kassara's drums thunder across the opaque nexus created through the guttural vocals and weighted guitar lines, while the bass lies beneath as a fundamental leviathan. Each track is dynamic and interesting, with some variation from the herald of "Storming the Death Gods" through the smoldering maple syrup grooves of "Howling of the Blind". The band even manages to pull off a 12+ minute epic here, "Cthulhu Rising", without it growing tired through its highly varied sequences.

Sometimes, if you throw enough meat into the machine, you'll arrive at the perfect ground beef, and I'd be honored to spread Death Gods on any sandwich or pasta dish. The tones alone are enough to floor most listeners, but the Finns have seen fit to also include great music, and without directly biting off the trendier styles of the day: brutal US tech death, atmospheric Incantation worship or 90s Swedish fellatio. Deathchain might incorporate trace elements of all these and more, but they manage to emerge a force unto themselves, a fresh voice to welcome the end of all things, the crushing weight of an Elder God leaning gradually onto its prey so it can savor every moment of their asphyxiation and the breaking of their pathetic frames. It's about fucking time!