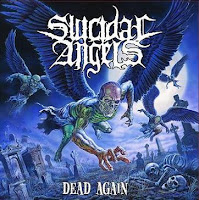 Greece continues to hone itself as a hotbed for quality thrash metal, a distinction it did not bear in the 80s (when it mattered most). Along with Drunkard and Tornado, the Suicidal Angels are one of the front runners, painstakingly evolving themselves with each new release, and their third and latest offering, Dead Again, takes a few baby steps past its predecessor Sanctify the Darkness. Not the steps that will propel the band to the top of the rock, mind you, but at the very least, you feel like you've gotten a solid punishment here, where the previous album just squeaked past the gates of mediocrity.

Suicidal Angels have a familiar approach to riffing that rekindles the passions of Slayer, Kreator and Sodom, though they will also cruise off at a mid-paced mosh that summons nostalgia for Exodus. The gruff, biting vocals of Nick Melissourgos most remind me of Tom Angelripper, and at a few points I though I had screwed up and was listening to the wrong album, since the new Sodom is just around the corner. At any rate, the guitars are crafted with precision, and the rhythm section tight as a pair of undersized combat boots, but the album's polish might actually work against it in some places. With compositions so aggressive and mean sounding, the album can tend towards gimping itself with such a clean tone. That's not to castigate the riffing itself, because there are a number of tunes like the Razor-speed "Violent Abuse", S.O.D. lurching "Reborn in Violence", and Vio-Lence/Sodom fusion of "Search for Recreation", in which the riffs excel. That's a lot of violence...

Unfortunately, not all the songs hit with the same impact. All are snappy and professional, but a few of the slower hitters like "The Trial", "Dead Again" and "The Lies of Resurrection" hinder the overall excitement, failing to keep momentum alongside their spiffy, rapid fire counterparts. Suicidal Angels are not an original band, and they'll tell you this themselves, so there are moments in which their music feels interchangeable with a number of other artists ranging from Dew-Scented to Sodom. Still, at least 6-7 of the songs here are quite fun, inducing fits of neck hammering that take you straight back to the 80s, despite their modern, controlled mix. There was more enjoyment to be derived here than either of the band's previous offerings, so if you're not too picky about your retro-thrash, you could certainly do a lot worse than Dead Again, and might seek out its undead vulture men for a taste of concussive belligerence.