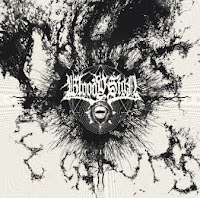 France's black and death metal acts are blossoming into a beautiful carnation for the lapel of metal. One of those that perhaps straddles both genres is Bloody Sign, an unquestionably talented three piece, the only question being when they might perhaps move from being pretty damn good to elite status much like countrymen Peste Noire and Yyrkoon.
There is some unorthodox technicality lurking in the drums and guitar work, furious occult discordance, speckled with calculated stops and even a hint of dark melody here and there. With the dense production and a heavily reverberated bass interlude thrown in for good measure, there is a punishing quality accompanied by a haunting airiness, for lack of a better word, that helps embellish the abyssal nature of the album.
The eldritch themes are bolstered by Hagend's raspy scream, occasionally joined with clean touches beneath the surface, and the maleficent thrum of his bass, an otherwordly delight. One of these is a dedicated bass interlude, with the guitar and drums each getting their own platform as well along with the intro and outro. However, if you were to remove these you would be left with essentially an EP in the album's duration. Not exactly worrisome considering one of the best metal albums did not top 30 minutes (you know the one, don't you?), however in some cases (such as this one) I can't help but want more.
Each track is solid, Morbid Angel influenced death metal with some black metal feel that is the backbone of Bloody Sign's sound. Not a br00tal type onslaught but nonetheless a lashing of violence and aggression. "Tongues of Shadows" and the outro are sure to please Mithras and Yyrkoon fans, tendrils of unlight reaching out to beckon you into a void of unimaginable terror.
Chaos Echoes is one of the more convincing death metal efforts I've heard in a relatively sparse year, most definitely worth a listen for those French aficionados and certainly another quality inclusion to the French catalogue.
Verdict: Win [8.75/10]
http://bloodysign.metalspirit.net/
Posted by JD at 6:36 PM