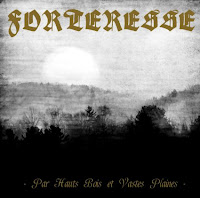 The titular 'vast plains' of the third Forteresse album are only too appropriate to its sound, because I don't think I've heard something quite this self assured and spacious all year. Written in seven parts, Par Hauts Bois et Vastes Plaines plays out like a solitary excursion across the Canadian north. In fact, the album is best experienced by closing your eyes and imaging the taint of mankind long disappeared, or the primordial forests and grasslands that once thrived before the manifestation of empire and industry. Both celebration and elegy, it is impossible to appreciate this in a rush, so I'd advise putting aside the 36 minutes necessary to absorb it in full. That is clearly the intention.

It's constituent parts do not offer individual immersion, so to center in on any one would be like trying to visually arrest a mountain when you're already standing in the foothills. Better that you stand back a distance, and acquire the whole picture. Forteresse perform in a slow, saddening style in which the drums create a minimal momentum to support the transient, huge structure of the nearly ambient guitars and synthesizers. The melodic overtones are never harried, thus the album's certainty is entirely dependent on the slow, ebbing effect they will have over time, as the dire gasping of Athros navigates the skies like a wheeling bird of prey, seeking to harvest the human hearts that are crushed by the visions of such an untainted, natural majesty as the Canadian wilderness permits. There will be periods of calm in which the metallic elements drop out, leaving the keyboards alone, or joining them with haunted winds, but the lengthy centers of the album (1st and 3rd parts) are dominated by the drums, guitars and howling.

About the only problem with this album is the fact that its never flexible. You'll either be in the correct mood for its resonant expanse or you will quickly tire of its one track purpose. There are few if any dynamics here outside of where the guitars and drums drop out and return. You will not be met half-way. Ever. There is no compromise, and no complexity. That said, if you find yourself in the position to experience this while hiking across the North American vastness, it will very likely saturate your soul alongside the morning mists and sun-flecked fields of frost, so save it for such an occasion and you'll likely connect better with the vision of its creators. Otherwise, you'll have to let your imagination fill in the curves of the land, from the steep rises of the spirit through the hills and woodlands to the rolling, open ranges.