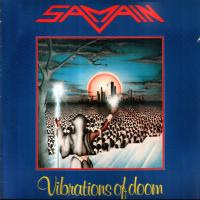 Sometimes when I reflect upon my life I think I must really be a German, though my adoption papers apparently state otherwise. Is Dutch close enough? I certainly hope so, because I have such a man crush on German metal of the 80s that I feel it's deep in my blood. Either that, or so much of it was just so fucking great that it draws out a connection in any listener of taste. Samain are one such example, a band long lost to the 80s in which they produced their sole full length, Vibrations of Doom, through Roadrunner, no less, before suffering a number of lineup changes and eventually calling it a day. Truly a tragedy, because this album is so great that I could easily have pictured the band alongside the ranks of Accept and Running Wild had they continued to foster their charismatic hooks.

Yes, Vibrations of Doom is perhaps one of the best one-shot German metal legacies in all of history, though some of you lucky old tools out there might have access to their later demos and videotapes, which contain material not heard here. There are 10 tracks here, one of which is an ambient keyboard intro ("Vibrations"), the rest of which are unmitigated excellence. Samain had a very laid back, road ready style that most resembles Accept, Saxon and Judas Priest. They rarely ever explode with energy, choosing instead to maintain a steady escalation into each chorus, with calmly plucked rock mutes and big chords that you will feel. There is obviously a decidedly 80s flavor to the mix, but like so many records of that period, it's timeless, and the heart grows fonder with age. Peter Ancaster's vocals were quite blue collar, like a poor(er) man's Udo Dirkschneider without the AC/DC screaming, but when his presence is fused with the consistency of the guitars and rhythm section, the album takes on this wonderful, street level appeal somewhere between Accept and Motörhead.

This is felt in "The Seal of Jidda", the "Straight Hammered Creed", "Seven Tears" and the bad ass "(Tale of a) Giant Man", all of which are enormous fun, but there is another side the band: the epic lyrics. Whilst many of Samain's peers were singing about the ladies and the cars and the booze and the hard luck and whatever else the mustache slinging hesher could so relate to in the 80s, this German band was incorporating lyrics about Norse myth ("Thor") and gladiators ("Gonna Swing My Chariot"). This is regulated with a healthy heaping of 'rock' and 'metal' related material, of course ("Straight Hammered Creed", "The Metal Breaks My Senses"), but it's a killer balance. Personal favorites, aside from those mentioned above, include the dire "Diamonds & Disgrace" and the boogied ballast of "Thank the Aerosmith", in which Ancaster scales some of the highest peaks his throat will allow him. The deep groove of "The Metal Breaks My Senses" is also impressive, and there is not a single power ballad on the entire album to break the steady momentum.

Vibrations of Doom is not the sort of album you would turn to if you want infectious speed like that of Avenger/Rage, and it's not as grimy as the Running Wild debut, but it's nonetheless one of the most reliable records to reach for if you want that pure, European sound so prevalent in Germany, Sweden, Holland and the heights of the NWOBHM. The songs often feel lazy, but tasteful, and possessing the atmosphere that so many of today's young, trendy throwbacks completely ignore in their inbred race to infuse the modern speed of power and technicality to satisfy the post-metalcore crowd that actually buys their shit up. Sure, there may be a few predictable chorus parts here, and the term relaxed might 'rarely' be applied to traditional metal with any degree of fondness, but Samain's debut is perfect for a day on the highway, or if you're just kicking back with a beer or a joint in your flat, wishing you were 2-3 decades in the past. A pity it had to end here.