Bastard Priest - Under the Hammer of Destruction (2010) 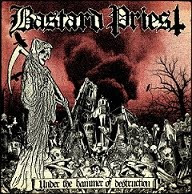 Last year, I was knocked flat by a Swedish act called Tribulation, whose debut The Horror seemed a highly effective cohabitation of the thrash and death metal genres, pulsing with vivid energy as it consumed and reconstructed age old tropes into hook loaded beasts. This year, I'm having a similar revelation, and that revelation is known as Bastard Priest, a pair of scandalous Swedish misanthropes that have managed to slice through the manure of nostalgia to snatch forth the diamond of quality from the ailing, retrospective trend that has saturated the death metal scene of the past few years. Under the Hammer of Destruction is pretty much everything you could want when reaching back to the early through mid 90s for a waltz with the reaper.

It's also a worthwhile package because it collects all of the band's material to date. The band's 2007 demo is re-recorded here, while the Merciless Insane Death demo is remastered and included in its entirety. In short, shell out the cash for Under the Hammer of Destruction and your investing in the collective output of the band to date, and it's all worth having. The demo tracks from 2009 have a harsher bass tone and more resonant, crashing vocals, and to be honest I prefer the sound there, especially in the ripping of "From Beyond" and the morbid atmosphere of "Merciless Insane Death" which comes close to a hybrid of Mayhem and Entombed. The newer tracks seem a little more polished, and that doesn't exactly do the material service, but the songs like "Blasphemy from Hell", "Total Mutilation" and creepy instrumental "Chock" are so great that you'll be masturbating to bloody climax at your old Left Hand Path and In the Embrace of Evil posters.

I'll be honest, the whole Swedish death metal thing has now been done to...death. There are so many fucking bands performing this aesthetic right now that I'm starting to lose count. However, whenever it seems that I've become fed up with it, a band like Bastard Priest comes along and executes their material with such a timeless enthusiasm and tact, that I am re-inserted into the grave. Under the Hammer of Destruction sounds sufficiently old, and had it been released in 1992, it would undoubtedly be considered a classic itself. But of course it's merely standing proudly on the shoulders of its forebears, waving the flag of decrepit flesh while cackling with punk death attitude and summoning an undead audience from the surrounding soil. If you're into other great Swedish retro stylists like Tribulation or Tormented, then this is absolutely an album you should not only check out, but plunk some currency down for. There are no stinkers, not even the Bombanfall punk cover, unless of course we're referring to the aroma of corpses unearthed...then it all fucking reeks, and we wouldn't have it any other way.