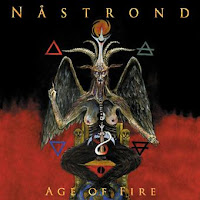 Age of Fire is the second album of Sweden's Nåstrond, and while it offers the same unusual brand of ritual-endowed black metal, I found it to be an even step down from its predecessor. Here, the band's lyrics would swerve almost unanimously towards Satanism, which for this period was not quite as contextually appealing as the exotic necromancy that dominated the debut Toteslaut. Then again, this focused direction does very well suit the sophomore's atmosphere of primal percussion, raw guitars and simmering, sinful snarls, and the Swedes certainly make it interesting through a series of sadistic and often titillating lyrics, available within this Frostscald re-issue (which also fosters a new, albeit less iconic cover image).

Gone is the warm, grave soil tone of the guitars on Toteslaut, and to be truthful, I found the production to this album somewhat flat. Tracks like "Womb of Chaos" and "Une Charogne" try to overcome this through the sheer power of riffs, but I also feel like these have a mildly lesser character, even if they offer a more diverse palate of dynamics. The sounds here are a lot more similar to the crude early material of Norse bands like Emperor and Burzum, only not as fluid in the quality of specific guitars. What holds Age of Fire above the ultimate, final flames of attrition is the incorporation of creepy, lo-fi synthesizers, pianos and narrative, pitch shifted vocals through the conceptual miasma. There are also a number of pure ritual or dark ambient tracks like the "Age of Fire" itself, a driving percussive vocal tribute to the blazing element favored by the priests of Hell, and "The Great Below", which is the sort of grim, instrumental set piece the band will further explore in the curious, non-metal Celebration of the Four.

Despite its various shortcomings, Age of Fire is still a good album, thoroughly provocative if slightly less effectual in the actual metal riffing. The album uses appropriate samples of readings from both the Holy and Satanic Bibles, and the lyrics in general are quite good regardless of your personal investment in the subject matter. The rasping vocals do not seem as inspired or venomous as the debut, but they're still adequate, and a number of songs like "The Four" and the ghastly "Consecration of the Flame" offer enough of a hostile, obscure environment in which to revel. I wouldn't hold it up against many of the Swedish classics of its day, because it is simply too crude and categorically outclassed, but if you're looking for a grim treatise on the Prince of Darkness, you could certainly come up a lot shorter than this.