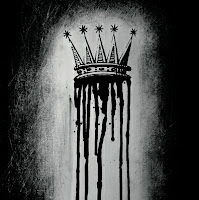 Oblivio Appositus brings together the talents of two of the younger, dour acts of the North Atlantic Ocean, a form fitting collaboration that sees its share of both atmospheric metal riffing and long, beautiful passages of ambiance. Ireland's Haud Mundus is the product of Wann and Gast, both members of the more traditional black metal band Myrkr; Gast also late of the promising Sol Axis and Slidhr. Wormlust is the brainchild of H.V. Lyngdal, who spends time between his native Iceland and England. I had already some exposure to the latter, reviewing the 2009 Wormlust demo called Seven Paths, which consisted of a single, 12+ minute long track, and a damned good one at that. But outside of Sol Axis and Myrkr, I had not heard Haud Mundus prior to the split...

Clearly, judging by their contributions to this release, I have been missing out, because their two tracks here are quite magnificent examples of the balance possible between the black and ambient genres. "Veins of Stone" is over 13 minutes, opening with a cavernous cacophony of morbid gloom and ringing hammer-like strikes, from which a slicing, huge guitar tone soon erupts, and becomes even huger as the duo lumbers through a number of devious, crashing poles. "Forever Desiccate the Seed" is briefer, at around 8 minutes, but its also denser and faster, more of a traditional black metal at first, then branching out into a number of ambient segues, like a mix of Shining and Raison d'Etre. I'd also point out that the production used by Haud Mundus is massive and accessible, a sure sign that the band could be taken very seriously in this particular sub-strain, courted by labels who value fidelity alongside other credibility.

Wormlust, too, has adopted a more bold if calamitous sense for production, and his two pieces here trumph the Seven Paths demo by measure of aggression alone. Truly, this is a frightening experience, Lyngdal's full, bloodied throat casting a ghastly pallor over the surging threads of "Surge - About the Death of a God" and the dusky, swelling phantasm that is "The Larvean Inauguration (Or: A Feast for the Animal of Reflection)". Thematically and stylistically, the material is not a far shot from Haud Mundus, so together the two flow like of wet stream of cursed concrete, its mortar drawn from the blood of angels and innocents. I felt that Wormlust was inherently more caustic and chaotic, with almost random segues into wild ambient, but he compensates by being the more horrific entity of the split.

The release itself is quite attractive, with a striking bloodied crown on its face, and a lyric booklet included with the digipak. I'm not accustomed to splits with great art direction, and though by all appearances this is minimal, I really loved the cerebral imagery it projected as I was listening to these interesting bands. Haud Mundus and Wormlust are both worthy of taking the reins from the now-defunct Xasthur, perhaps Leviathan, oining their voice into the chorus of obscurity championed by many devotees of Burzum and other dire progenitors. Their pairing here can be no accident, because they both share the same skill at creating discomfort through laxing and swelling climes of glacial fascination.