Körgull the Exterminator - War of the Voivodes (2010) 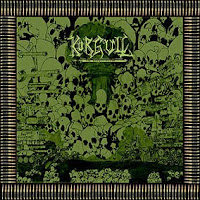 On the surface, Spain's Körgull the Exterminator seem like a rather too obtuse tribute to Canadian progressive sci-fi metal masters Voivod. Not only is their name taken from a Voivod song, but the name of this sophomore album is even a direct tribute (and yes, I do know the term's Slavic origins). The similarities do not end here, because the Spaniards are essentially borrowing the formula found on War and Pain and Rrroooaaarrr and then trampling it out to an unholy extreme of blackened death and thrash. Had you ever wished your Canadian heroes to amble on in the path of ripping oblivion, rather than concoct their progressive masterworks such as Dimension Hatross and Nothingface, then perhaps War of the Voivodes is what might have transpired.

What's more, Körgull the Exterminator have one of the most vicious female vocalists in the business right now, in the magnificently named Lilith Necrobitch, and she goes a long way towards the long term effects of this album. The band is just a dynamo whirlwind storm of holocaust and death, honing in more on a strategy of beating the listener to death than any intricacy in raw compositional skill. However, such a highbrow bearing would be inconceivable for this, because Lilith's vocals are so fucking hostile, the guitars carving out your skin like nuclear saws, that you have no choice but to be destroyed under the album's weight. There's no escaping the dread, constant payload of "Sado Soldiers" or "Axe Thrash Attack", and there will be no entertaining of your sensibilities anywhere here, unless you count the slightly tweaked, ancient Voivod architecture in some of the "Road Killer" or "For Total Holocaust" riffs.

So what starts as an homage develops into something intensely brutal, and the result is not unlike a Blasphemy, Repulsion or Blasphemophager in its level of unchecked violation. This is pandemonium at a premium, raw ripping force that succeeds on no other level than its utter domination of your ass, and it's easily one of the best albums this year at such a direct, no frills tactic, burying their debut Dogs of War within mere minutes of the haunting ambiance of the "Raw War" intro. Few bands lately have offered so much through so little, but Körgull the Exterminator are flat out fun for anyone who isn't a jilted, pretentious poseur. Do you ever close your eyes at night and dream of what it might have been like had Voivod's 80s vision of frightening, post-nuclear dystopia transpired at the close of the 80s? Well, we wouldn't have had black metal bands singing about Vikings and wrist-cutting in that timeless. We'd have Körgull. So man (or woman) up or clear the fucking hall!