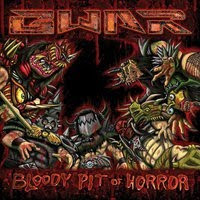 You've got to admire the persistence of a band of space conquerors whose disgust for humanity has led them into an infinite cycle of showmanship and aural slaughter, but for far too long, Gwar had honestly screwed the pooch, fucked off from their excellent and memorable thrash roots to explore various other tones and sounds, most of which failed to truly complement their sense of humor. Well, at least for the past few records, Gwar realized that they were a fucking metal band with balls, space balls, and they've not only crossed the bridge back into the realm of extremity, but begun to expound on its possibilities. The gimmick may be well past the date of expiration, but for their 11th full-length, Bloody Pit of Horror, at least they're attempting to shove their styrofoam props right where they belong: where the sun don't shine, in your posterior.

What I'll first mention here is the guitar tone, it digs deep and pounds hard, causing your rectal walls and intestines to shudder in "Zombie March", "A Gathering of Ghouls" or "Storm is Coming". The drumming here is tight, and the bass audible, as are the many proper placements of gang shouts from beyond. From a technical standpoint, the band have never really sounded sharper, emitting riffs whose complexity, while not particularly novel, outshines even their best records of the 90s. They take chances, as in the brooding mosh slog of "Come the Carnivore" with its somber, chanting vocals; or the bouncy prog/thrash of "Sick and Twisted"; or the bad ass, almost New York styled street hardcore that drives the thrashing chorus of "Hail to Genocide". Together, it should all translate fluidly into the band's inevitable live gigs, where fluids of their own will be flying over the crowd as they recite decades of mocking history.

There is no doubt that Bloody Pit of Horror is the savage side of Gwar, and effective enough as a blunt instrument to steer the doubters back on the proper path of pitiful worship, but do the songs have the character of the classics? Any "Sick of You" in sight? Any "Maggots"? Any "Black and Huge"? Unfortunately, no. There is still the curve of bitter, biting sarcasm to their lyrics, but they seem far more straightforward, as if they were on the verge of transformation into a straight up thrash/death metal band. As if the suits were about to come off, like the gloves, and they were tired of fucking around. Outside of "Tick-Tits" or the moody climax of "You Are My Meat", I don't think I had to stifle even a single giggle. As for the songs themselves, their prompt and crushing ballast doesn't seem to yield the level of sticky riff-writing that could put them over the top, so we're left with bruises but no permanent injuries. And when I'm listening to a Gwar album, I'd prefer to be as metaphorically beaten as I would be by their stage props.

Verdict: Indifference [6/10] (the carnage must be unimpeded)