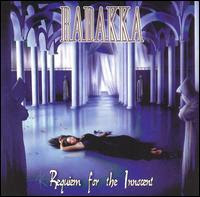 Radakka might just be one of the most bizarre mysteries of the metal universe, not for performing in some unorthodox or highly creative style, but for somehow existing in the first place when and where they did. Truly, I was not expecting to hear a sophomore effort from this band, but yet it exists, and still through Century Media records (thank the stars for multi record deals?), and still sticking out on that roster like a disenchanted college student that doesn't realize it's class graduated long ago. Yes, Requiem for the Innocent, while pulling together a more unified concept, is still the same mix of lighter progressive metal with hard rock aesthetics and the sort of bad-ass club circuit rock and roll frontmanship that made my eyes roll when it was performed by Skid Row and Extreme.

Unlike the debut, it here tends to border on the embarrassing, especially through some of the lyrical delivery. "Phantom #9" opens with a bruiser of an old school, predictable metal riff before the long 'ooooh yeah' that pretty much takes you straight out of the potential, ceding into some bluesy soft rock verse before it erupts into a chorus that I could not help but to laugh along to:

And if you think that's bad, the second refrain chorus is even lamer, especially how it's just rapped off like some lame MTV countdown hard rock abortion that took a time machine out of 1986. Thankfully, much of the remaining fare is a marked improvement over this, even though it leaves much to be desired. "Still a Stranger" operates on some tidy, cement grooves while Jon Dobbs channels a style more like an angry mid-ranged Ray Alder, while "Requiem for the Innocent" moves into pure, grooving progressive metal territory, with some pretty silly down pitched vocals and creepy, whispered narratives. "Azriel (My Dying Love)" is almost intolerable due to the chorus, and "Whore" descends into true comedy, a funky groove metal piece with a pretty awkward marriage of lyrics and melodic breakdowns where the metal all but cuts away.

Ironically, the album closes with a trilogy of its strongest tracks, but these are too little and far too late. "Gothic Rain" has some angry gang vocals and glinting melodies that break up the stormy weather of the verse, while the 8+ minute "Queen of Autumn" at least functions on a musical level, sort of this strange mix of 80s pop and hard rock. Too bad about the vocals, which trade in Dobb's stronger range for a more scattershot, schizoid narrative feel. "Sorrow's Thorn", the finale, is a morose ballad piece which is highly reminiscent of Fates Warning circa 1989-1994, and though predictable, its perhaps the strongest and least cringe inducing track on the whole of the album.

Requiem for the Innocent is easily the worse of the two Radakka efforts, worse even than the first few Savatage albums fronted by Zach Stevens, which suffered from some of the same problems as this, an identity crisis in which the thin line between bad hard rock/AOR and real heavy metal blurred beyond resolution and recognition, to produce a stumbling hybrid that could capitalize on neither field. I realize the partial foray into street-like rock lyrics was meant to flesh out a concept here, but in the hands of Dobbs and crew, this just feels like an experiment gone awry. They've tried to funk up the formula from Malice and Tranquility, introduce a little more bad ass into the mix, and thus the subtle saving graces that kept that debut in the realm of the average and not the suck just disintegrate.