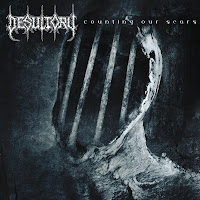 Desultory is a name needing little introduction to fans of melodic Swedish death metal of the 90s, with two good albums under their belts in 1993's Into Eternity and 1994's Bitterness, both released under the fairly high profile of Metal Blade Records. Like their countrymen Entombed, they decided to journey into a more rock and roll influenced direction in the mid 90s, after losing one of their core members. This resulted in Swallow the Snake, an ill-received effort that did not ultimately pay off for the band. Granted, it wasn't entirely void of decent music, but even as one open to the potential of such a manipulation, I must admit that it paled in comparison to their earlier material, and the album's fate was appropriate, the members' decision to continue that direction as Zebulon also folded some years ago.

Cut ahead 14 years, and Desultory have returned with their 4th full-length, aptly titled Counting Our Scars, and returned to the heavily melodic roots. That this comes at a time when the old school Swedish sounds remain all the rage is probably not a complete coincidence, but is there ever? The attraction to this style is at a natural retrospective height, so it was the perfect time to strike, and Desultory have at least built a record here that honors their last effort, Bitterness in its melancholic, thrusting energies. "In a Cage" is a killer opener that really builds up expectations for the remainder of the content, with Klas Morberg's vocals passionately driven atop the sorrow stoking rhythms and enthusiastic drumming. Fans of At the Gates, Eucharist and old Cemetery will immediately adhere to this style, and for the most part the record holds to the standard, through engaging pieces like "Uneven Numbers", "Dead Ends" and "Leeching Life" holding the lion's share of my attention.

Considering that most of the current and returning Swedish death purists use a more brutal scenario in their composition, a band like Desultory is always welcome. There's certainly enough musicality and aggression here to draw in devotees of Slaughter of the Soul, The Somberlain and A Velvet Creation, and the majority of riffs deliver without feeling too trite, familiar or repetitive to the band's own past. Had Swallow the Snake never manifest, this record might very well have filled its space, but probably the gulf of 10-15 years was required for the band to come to terms with their identity, and how something that wasn't broken, never needed any fixing. Counting Our Scars is not some miracle return to form, and its neither the most engaging of the recent albums in this territory. I'd give a slight edge to Evocation's latest, a band that's been around nearly as long, but certainly this is another of those releases which evokes the 'welcome back' sentimentality, in addition to some fine music.