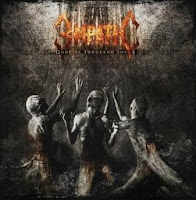 When we think of Polish death metal at large, we tend to reference the more brutal, fantastic pummeling of Vader, Behemoth, Lost Souls or Decapitated as the norm, bands that excel in both the virtues of production and craftsmanship, most of which have carved out an enormous success for themselves against the sodden mediocrity of many in the brutal, gore enamored brutal death field for a reason. So it's interesting to hear a younger, fresh band like Empatic, who take their death metal in a slightly more accessible direction, with clear influence from the thrash and groove sectors, and just enough melody incorporated that their brick like, shifting rhythms never become dull, even though they seem perfectly tailored for an endless moshing anomaly.

Gods of Thousand Souls sounds enormous, with the clarity of tone and balance of instruments generally reserved for far bigger budgeted acts, and this goes a long way in the presentation of simpler, plodding tracks like this which rely on forceful, slamming rhythms that make it hard to sit still. Maciej Rochaczewski cycles through death and grunts and harsher snarls reminiscent of many Swedish melodic death acts, but they sound cavernous and rumbling across the leaden sound scape, and the result is something like a mix of mid 90s Hypocrisy, Cannibal Corpse, Pantera, Sepultura, Machine Head and At the Gates, which may not sound like the ultimate concoction to some listeners, but you might be too busy spinning your fists around and stiffening your jaw to these 11 primal maneuvers to notice. With such a massive tone in tow, the result is something noticeably loud and effective, even though there are some constituent tracks superior to others in the actual quality of the riffs.

For instance, the melodic jackhammering of "So What" or the band's namesake "Empatic" creates immersion and escalation before it tears out its intensely huge groove section, and the verse rhythm for "Fulfilled Dreams", as simple as it seems, is one of the most effective on the entire album. But one of the miracles here is that the band is able to take a very simple palm muted bottom string chug fest in "Vs." and somehow manage not to suck at it like so many metalcore or deathcore bands. I'm not sure if it's the production or the progression of the notes, but something like this that I would so normally scoff at seems like a steady ballerina in the hands of these Poles. I really wanted to fight someone when I heard this song, despite the primacy and familiarity we've all got with such a pattern. Other tunes like "G.O.T.S." and "Dreamer" are a little less successful at beating your head in, but they compensate with the desperate pleading of their melodic components, chords rooting higher on the fretboard.

If there's a downside to Gods of Thousand Souls, it would be that the band rely perhaps too often on their huge, chugging grooves. They're more than qualified at writing them, but I'd really like to hear the band rip out more of their faster material, which always seems to come as a burst of surprise on this album. The lyrics and titles are also quite simplistic excavations of emotions, betrayal and unrest, and they could be improved upon with starker imagery that better suits the slogging, slugfest of the rhythms (bearing in mind that English is not likely their first language). The cover of Orchestral Maneuvers in the Dark's pop dance piece "Enola Gay" is actually rather interesting when laden with the chugging guitars, but be warned that its got a warmer vibe to it than the originals. All told, there is a lot of room in which Empatic could grow, but Gods of Thousands Souls is worth checking out to those who don't cower from a blend of genres, accessible crushing riffs and lots, LOTS of slam material to share with both friends and enemies, without feeling shallow or obtrusive.