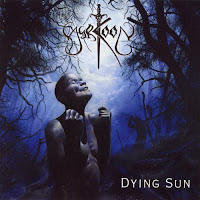 One wouldn't have to plumb far into the depths of Dying Sun to note its improvements over Yyrkoon's debut Oniric Transition, because those that exist are largely worn on the surface, in the area of production. The guitars, in particular, sound far more potent, with a thicker, melodic broth to them and less reliance on synthesizers. The riffs are not necessarily evolved to another plateau of composition, for they very closely resemble their predecessors, only delivered with a finer set piece this time around, partially due to the new members the band had attained, including a new axeslinger in François Falempin. Alas, there is also a downside to Dying Sun, and that's the rather haphazard lack of the debut's intriguing atmosphere in a mad rush to write more accessible material more clearly streamlined into the 'melodic death' category.

The band uses a lot of crossover between clean and harsh vocals this time around, and it's not always to the benefit of the songs. "Crystal Light" and "Flight of the Titan" are two examples, the latter particularly confused with its mix of gang shouts, clean soaring vox and largely uplifting rhythm guitars. Gone are the muted, fantastical hues of the debut, and we're left with something far more typical, and the jury's out on whether Yyrkoon are able to pull it off. "The Clans" and "Stolen Souls" offer a few good riffs each, but they're ultimately mediocre when rubbed against the better acts of Finland or Sweden. In fact, the best tracks found on Dying Sun are those that experiment the most, like the vast rhythmic dynamics of the progressive "Back to the Cave" or the jack hammering swaths of melody and aggressive that dominate the unfortunately titled "Thrash 'Em All". Then again, the instrumental "Gods of Silver" is your typical melodic death piece with added noodling, and "Screamer" is very inconsistent, with its mesh of progressive embellishments and mundane death/thrash.

For some reason, I really don't enjoy Stéphane Souteryand's clean approach to much of this record, and while it's not a negative to hear his capabilities in such a range, they feel rather messy over the substance of the meatier riffs. Perhaps this hurdle is due to his natural accent, perhaps not, but combined with the inconsistency of the music, it all culminates in what I find to be the least impressive Yyrkoon album. Oniric Transition certainly didn't have the tight and controlled mix of its successor, but at least it had charm, where this feels like a pretty daft peripheral to most of the European melodic death that was occurring at the time. When matched against one of the era's defining works like a Natural Born Chaos or Damage Done, Dying Sun is simply no structural comparison. There are well implemented ideas here or there, and it feels like a sure footed stepping stone towards their later, greater efforts Occult Medicine and Unearthly Opera, but I wouldn't never seek it out with those options available.