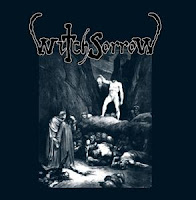 The band is called Witchsorrow, the record label Rise Above Records, so it's only too safe to hazard a guess that this will be either traditional or psychedelic doom before you've even heard a note of it through your speakers. Well, the UK trio certainly lean towards the former category, if we're thinking in terms of Cathedral or the more sluggish material from Sabbath or St. Vitus, and one actually might conjecture whether or not Lee Dorrian signed the band because he saw a little of his earlier self in their sound. Certainly, there are apt comparisons here to the first few Cathedral records, before they adopted their more groovy, accessible format with Ethereal Mirror (which happens to be one of my favorite albums by that outfit).

So, if your expectations are for slow, tortured sequences of chords that swell and groove to the disaffection of the vocals, then Witchsorrow are only too happy to oblige you in a slurry of five tracks and 45 minutes. 'Necroskull' has a similar lamentable tone to his howling that falls in somewhere between Dorrian and early My Dying Bride, and the music is implicitly simple, with nary a surprise hiding out anywhere. The bass and drums follow the thick axe broth all too closely, and as a result there is a somewhat one track feeling through "The Agony" or "The Trial of Elizabeth Clarke", though "Gomorrah" thankfully picks up the pace in the verse to "Symptom of the Universe" levels before its own churning, nihilistic breakdown, and "Impaler, Tepes" had me slowly craning my neck when it too started to rock.

Unfortunately, these don't represent most of the album, which is rather lacking in memorable riffs despite the straightforward intentions of the band. Nothing here is quite so primal or aggressive as the heights of Electric Wizard, or the more recent Ramesses, and there's not much of a variation outside of slight, minimal psychedelic ambient phrases like the tranquil calm at the core of "Impaler, Tepes" or the drudging melodic hypnosis deep within "Thou Art Cursed". I'm a stickler for certain qualities in doom, in short the ability to create the feelings of inevitable oppression without ennui that bands like Sabbath, St. Vitus, Candlemass and Trouble first manifest, and I'm not sure I'd give this debut a passing grade. By no means are Witchsorrow terrible, and to their credit, they're actually quite sincere, but I'd like to hear more than just the bare minimum of effort laid out before me, spelling my damnation.