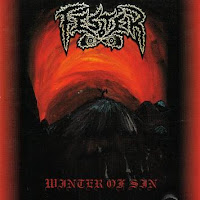 Fester's Winter of Sin has been out of print for some time now (on CD, at least). Being that it's one of very few death metal cult classics from the land of Norway in the early 90s, and obscure, old school death metal is growing quite popular alongside the many young acts that worship the style, it makes perfect sense for a label to license and re-issue it, which is what Abyss Records have done here. Sadly, I'm not sure that time has been all that kind to this band, who originally existed from 1989 to the mid 90s before a recent reformation. I'll go further and admit that I was never much of a fan to begin with. The songs feel no more hooky or interesting now than they did almost 20 years ago, and they simply don't have the gruesome and fascinating staying power of a band like Molested.

However, Fester get a few points for their vision, which was somewhat unorthodox for death metal bands of their day. The riffs move largely in a sluggish sense that evokes a doom/death hybrid, while the vocals are rasped much like the black metal genre. The Norse have a strict dynamic sense, with clashing drums and sloth-like mute phrasing to the guitars that are not above or afraid to emit melodic components where necessary, and they'll often throw in this great echoed chamber into a track like "Sences Are the True You" which allows for several seconds at least of real menace ala Pestilence meeting Darkthrone, or a strange peripheral similarity to Celtic Frost or Hellhammer. The occasional noodly solos can be distracting, perhaps effective under a different mix, and the actual riffs are rarely ear catching beyond their archaic authenticity, so there are just not any songs here I can really get into.

The primal, almost minimal of "As the Swords Clinch the Air" loses traction when it erupts into the mid pace with tinny drums, and the strange rock & roll grooves of "A Dogfight Leaves a Trace" feel clamorous and out of place, both contributing to the sloppy overall feel. Certain tracks such as "The Commitments That Shattered" or the atmospheric "Liberation" are more taut and acceptable than others, but neither holds up particularly well against the better death (or black) metal albums that were being cranked out in this period. Winter of Sin was never a horrible album, per se, but it's a little weak for anything more than cult appeal. That said, I know there are folks out there who enjoy these records (and I feel that the sophomore Silence is a little better than this), so having them back in circulation doesn't hurt, especially with a remix and remaster.