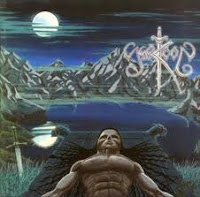 France has long been hallowed as a grounds for innovation in the black metal genre, but what of its death metal scene? Certainly, acts like Carcariass, Gorod and Atrophy stand out for their dizzying acts of unusual technicality, but Yyrkoon, named for the original nemesis and cousin of Michael Moorcock's fictional character Elric of Melnibone, wore a different stripe. Unshackled by the scripture of brutality and convention, they've undergone an interesting evolution through their career, which was 'officially' launched with this debut Oniric Transition in 1998, after the band's Oath, Obscure, Occult demo two years prior.

This is an unusual album, or rather an album of disparate parts merged into a functional framework. Yyrkoon were at this time a stark fusion of black, death, thrash and symphonic metal, all incorporating a progressive leaning largely through the song structure and the melodic lead work, the last of which was not all that far from what Death were doing in the 90s. As a result, the album can suffer from a mild lack of coordination, but so many of the individual pieces are pleasant to listen through that it ultimately succeeds. Perhaps not to the extent that later, more aggressive efforts like Occult Medicine and Unhealthy Opera succeed, but for 1998 it was an interesting footnote on a shifting landscape of emergent and transforming genres. Though the production of the whole affair feels little more than a glorified demo, its use of horror, occult and fantasy lyrics among the atmospheric sequences and largely effective guitar riffs is still refreshing over a decade out.

The center pieces are here are the real treats, and by these I refer to the longer compositions like "Throne of Complains", "The Awakening" and "Wind of Decline", each of which cycle through a fairly expansive number of riffs on their paths to the memory. Yyrkoon are capable of busting out memorable lines of melodic death or thrash metal amidst segues of heavily synthesized epic black/death metal, and this uncanny ability to bounce back and forth makes each a joy to listen. None of these tracks stretches on too long in any one particular tempo, and at worst they could be accused of carrying too much weight. Other tracks like "Elemental Storm" and the soaring, atmospheric "Lost Ideal" with its clean vocals, are likewise curious, and the remainder of the album consists of shorter 1-2 minute intros and interludes which are more or less forgettable.

Stéphane Souteryand's vocals do somewhat hold the album back from greatness, for while he expresses competence in his various snarls and howls, it's strangely his cleans that are the most effective. Also, as mentioned, the mix is pretty weak, the guitars feel very thin as they allow the synthesizers and pianos to breathe perhaps too fully, and a remaster of this with thicker tone would go a long way towards adding much needed power to the more emotional phrases. But aside from this, and the often scattershot feeling you get when the band continues to cycle out change after change, there are not a lot of complaints to be had with Oniric Transition. It was a sound debut for a solid career, and while it bears only a passing similarity to their later, better albums, you can hear the creative larva within as it struggles to chew the brains of its hosts.