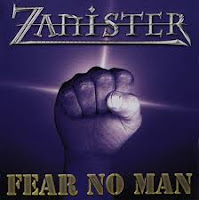 Symphonica Millenia didn't exactly re-invent the wheel, but there can be no argument that the lineup of Zanister might have represented a bold new hope in US traditional metal. Well executed compositions, almost unparalleled ability in the two guitarists, an excellent rhythm section to back them up, and a promising new singer. It wasn't perfect, it might not have even been great, but there wasn't anything negative to be said for the Ohio based project. Fear No Man attempts to follow this up, and while it largely sticks to the same formula, and in some cases amps up to a more lethal dose of aggression, it's ultimately just not the measure of the debut, and a few pretty dumb songs really throw off the rest.

The fact that the lineup remained the same between the two albums speaks to me that this Zanister was meant to be a pretty serious band, and not a revolving door of guest musicians from the Leviathan Records family, and the first song here, "The Shades They Color Thee", picks up where the debut left off, with a slightly more modernized, angry tone to it, Brian Sarvela's voice almost picking up to a Hetfield level of angst, and "Generation Breakdown" is quite good. "The Fallen" opens with a groovy, almost Zeppelin-like rhythmic pattern which seems at first flightier, but then the bridge is a little more straight forward. "Got to LIVE MY Life" is another tune almost worthy of the debut, and the bass driven title track is very Chastain, you can almost picture Leather Leone singing it on Voice of the Cult or some other, sadly obscured album. Unfortunately, there are also some semi cheesy, simpler heavy rock tracks like "Hell On Earth" and "You Live for Greed" that are just not worth the time, and "Grip of the Groove" is downright laughable as it attempts to pummel you with seductive rock rhythms.

All in all, there are very few moments in which the potential brilliance of the debut, or the classic feel of David Chastain's playing really shine through, like the mixed quality "Egyptian Nights" which seems like something that could have been on his instrumental Within the Heat, with vocals added in. The Zanister lyrics were not exactly a strong point before, but here they feel even more 'meh', though not without some meaning behind them. Even the cover image lacks some of the inspiration of its predecessor, and in the end, Fear No Man is just another of those cases in which you wish you could reach back through history, salvage half the material and dispose of the rest. Supposedly, this was not to be the end of the project, but it's been nearly a decade so the hope of hearing more material has dulled. The mix here is as tight as the debut, and not every moment is wasted, but this is not something I'd recommend giving a chance unless you're a total die hard for Chastain and Harris' finer days, which very rarely turn up.