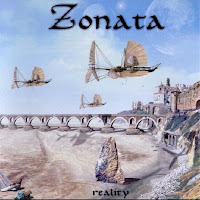 With its thought provoking cover that is at once introspective and unusual, one might draw the impression that Sweden's Zonata had gone all out progressive for their sophomore outing. This is not quite the case, though there is an undisputed maturity brought across in their compositional skills, meshing their blazing German power metal roots with something slightly more unique than mere worship. Yeah, you can still easily trace the band's influences back to the Gamma Rays and Helloweens, with a dash of modern progressive/power metal like At Vance, a fleck of Dream Theater, but all elements come together here for what is in my opinion the best album of their limited career.

There is very little ballast to be cut from the 45 minutes of playtime, and what traces you'll find generally revolve around a handful of blase chorus sequences which rarely thrill over the more adventurous guitar work of John Nyberg. That's not to write off the other Nyberg, Johannes, however, whose vocals have improved here from the nasal Kai Hansen tones to something with a more unique weight. Not enough that you'd distinguish him from dozens of other competent power metal sirens emerging from Europe in the early 21st century, but enough to carry the torch for the band backing him, which includes his own keyboards. "Divided We Stand" spears his shrill attitude over neo-classically infused shredding, with a pompous, escalating chorus that slams through a mid-paced groove. "Symphony of the Night", "Wheel of Life" and "Evil Mind" simply surge, the keys and backing choirs adding grace and depth to the momentum, while "Dimension to Freedom" hovers on a more varied brink of all out, generic melodic anthem after a few moments of steadily climbing synthesizer-driven progression.

Very few of the numbers are the sort to go down in history as 'classics', but Reality is more thoroughly engaging throughout than its predecessor. A few tracks in the lineup sag below the level of the rest, but not for long, as even these produce spikes of melody to put the listener back on the fast track. "Life?" is the most obviously accessible sing-a-long here, but it's fortunately pretty good, with a catchy guitar bit beyond the chorus that almost matches the dreamy sun scape of the cover, strange devices sailing through a clear sky across the works of some foreign industrial renaissance. The production was not a strong point on the debut, and I feel that it's not a great deal better for the sophomore, but it's crystalline enough for you to get the idea, and the vocals thankfully don't bury the rest of the band. Not necessarily a marvel of an album, but it's the most easily recommended work of Zonata, and I bet with a little more of a push from the band's label Century Media, could have stirred up greater waves of appreciation.