Impiety - Worshippers of the Seventh Tyranny (2011) 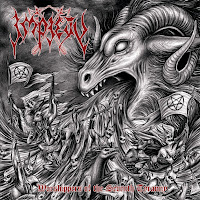 Seven tyrannies, seven albums, and to commemorate their pungent, strong consistency of carnage throughout the past 15 years, your most hated Singaporeans Impiety have attempted something different: the single track concept album. Yes, rather than the rampant, rapid apocalyptic bits and bites of yesteryear's Kaos Kommand 696, Paramount Evil or Terroreign, you will have to endure nearly 40 minutes straight of hybridized extremity. It's a formidable prospect, for sure, but if anyone is up to such a task, why not Impiety? They're not the first Asian blackish metal band to flesh out the possibility; Sabbat of Japan comes to mind for their obscure masterwork The Dwelling, but then they've got a somewhat different palette of sounds from which they've evolved, though the influences are likely the same.

The test here is whether or not these naturally blasting mavens can pull off enough dynamic range that the listener doesn't become painfully unsettled and bored, and to an extent, Impiety have. Long, drawn out, Hellhammer or Celtic Frost-like sequences with slower riffs and Shyaithan doing a fairly obvious impression of Tom G. Warrior's classic constipated vocal style are alternated with faster riffing, taut blast beats, and strangely enough, the latter almost feel more compelling in this context, becoming hypnotic around the 15 minute mark before the song lags once more into it's careful side, which seems to almost climax right near the center, around 17 minutes with some pretty melancholic sounding melodies over the grisly, doomed rhythm guitars. There are a few drudging, lacking guitars present in certain places, some of which are simply uninspired, others which go on perhaps a moment too long, and though all the music is appropriate to the album's blasphemous, apocalyptic theme, it does somewhat lack in cohesion, with a few transitions feeling as if they were simply ground up against one another.

Now, I'm a fan of Impiety, and I actually enjoy most of their full-length albums prior to this to varying degrees, but my initial impulse was that this might not be the best use of their time. In this, I admit I was rather surprised, because while it's not one of the better single track long players I've heard in extreme metal, it's fairly professional. The sound is as focused as they've ever come across, and they've recruited Fabio Zperandio of Ophiolatry to record a few tasteful leads. To be honest, the band actually sounds far more accessible here than their older, outright blitzkriegs, and though there is nothing 'soft' or friendly about the compositions, it does lack for the nuclear fits of frenzy I've so admired in the past. Worshippers of the Seventh Tyranny is hardly scrap metal, and its execution is efficient and vaguely interesting, but against the sum of its parts, only a few sections particularly stand out, and the 40 minute epic format ultimately doesn't suit them well enough to recommend it over their past ravages.