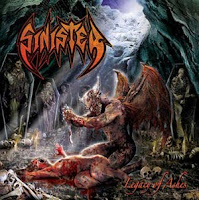 Sinister might not have produced the very best output in the Dutch death metal legacy, but I'd never deny that they've been the most consistent band hailing from that scene. Their 9th full-length album, Legacy of Ashes, is yet another example of why the band has become synonymous with reliability, an unending titan of forceful butchery that is almost always guaranteed to deliver a reasonable and focused effort, even through what seems to be an ever shifting roster of musicians (no change here from the previous full-length The Silent Howling in 2008, but after recording this they've already hired on a new bass player in Creepmime's Joost Van der Graaf).

Legacy of Ashes features all of the hallmark blasting and punching brutality they've celebrated from their early 90s classics, but with a notable element of thrashing abandon in the riffs that dominated efforts like 1998's Aggressive Measures. I'd almost compare this to the reunion effort Resurrection Macabre from countrymen Pestilence, only that album was more mechanical and repetitious, while this cranks up the aggression, Aad's gruff gutturals sounding similar in their delivery to Patrick Mameli's latest assaults. The material ranges from rapid, atmospheric hostility in "The Sin of Sodomy" or "Into the Blind World" to a few more primal, groove oriented tracks with some savage mute storms that fall somewhere between Slayer and Vader, ala "The Enemy of My Enemy" or "Legacy of Ashes" itself. Some of the more impressive constructions lie deeper into the playtime, like the battering of "The Hornet's Nest" with its taut and reckoning death/thrash outbreaks, or "Righteous Indignations" with its discordant, arching rhythms, but it's consistent enough throughout.

The songs do tend to lack truly killer individual guitar riffs that will sucker your speakers into cyclic masturbation, but on the whole I'd say you get a good, sore neck from this effort, more so than its direct predecessor at least. A few of their albums have lapsed into monotony, but Legacy of Ashes feels slightly more distinct; some clear variation in the tracks, yet still enough of the straight forward components that most have come to associate with Sinister through their 20+ years of existence when they're looking to stand directly in harm's way. No punches are pulled here, it's just tough as nails death metal without indulgent virtuosic tendencies or pedestrian wanking, and likely worth hearing if you're a fan of the band's last decade of material, or their related projects like Infinited Hate, Houwitser or Supreme Pain.