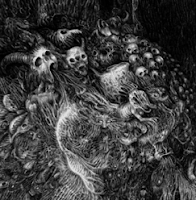 Flagellant is another of those Swedish bands surrounded largely in the haze of mystery, with members using only an initial as their band handle (E, S, and J), but there is no mystery about the actual music they perform, which is purely straightforward black metal misery cast in hellish, snarling tones and surges of tinny blasted drums that never collapse beneath the weight of the guitars that soar across them. Often this album feels like you're standing at an airport in the abyss, blazing phantasms arriving and departing with their crew and cargo of the damned and dying, as they commute to and from whichever punishment areas the devils have selected as their eternal fate.

In other words, it's pretty good, but not something you haven't already heard a thousand times. In particular, I'd draw comparisons to Watain, or the more recent material of Finnish vabd Sargeist, which shares a similar thrust towards encapsulated melodies, frozen in conflagration of evil. The blast beats of "The Black Void Unfolds"and "God of Torment" do feel somewhat monotonous, and it doesn't help that the band's better riffing doesn't arrive until later in the album, with the scathing, beautiful "Within the Circle of Ourobouros" or "The Unseeing Eye", or perhaps in the Bathory blitz of "Monuments" itself, which is in my opinion the best of this entire lot. The band seems to actually excel when they slow down to a mid paced, above which their majestic, ghastly tidings fare much better as the listener is able to partition the scintillating shine of their chord streams. "Into the Maws of Death" continues this surge, angrily writhing guitars lashing at the ear like the scourge-whips of pit fiends.

Monuments is good for a debut, with the band having only one demo prior, but as I said, there are so many similar acts to fall back on that it's no surprise, and the mystery members might very well hail from other bands for all I know. If you fancy the entirely traditional strain of Swedish black metal, then this should be on your list to check out. It's not as empty and blast-headed as some of the works of Dark Funeral or Marduk, as haunting as the orthodox Swedish black acts like Ondskapt, nor as intriguing as a Mörk Gryning, but it gets the job done, and those seeking out the usual, infernal vortex of abrasive, melodic guitars and harsh, resonating vocals will likely swallow the fire here with unhallowed pride.