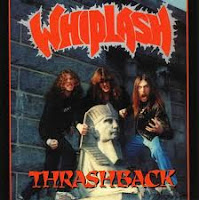 Thrashback is the 6th full length album from Jersey's Whiplash, and their 3rd through Massacre Records. As the title pretty obviously implies, this was the 'comeback' album, the inevitable return to the band's roots, even though it comes in direct succession to such folly as Cult of One and Sit Stand Kneel Prey. Whatever the reason, Portaro decided to reunite with the other Tonys of the early lineup, Bono and Scaglione, and abandon the glossy groove metal and bizarre heavy/speed metal roots of the preceding pair of albums, and though the vocals here won't always remind you of Ticket to Mayhem or Power and Pain, the music is definitely feeling like 1987 all over again, albeit with a cleaner production and less overall speed and aggression.

The general tendency of this record is that the faster it goes, the better it gets. Songs like "Thrash 'til Death" (yes, before Destruction, just like "Nailed to the Cross") and "Nails In Me Deep" are both classic examples of this band at their best, ripping and explosive as they twist their heavy/speed metal roots into a street ready thrash impetus reminiscent of the Metallica debut Kill 'Em All, and at some points ("Resurrection Chair" for example) it's got a real street flair akin to the band Zoetrope. There are some spots in which the band steps out of this comfort zone, like the frenetic neo-classical shred off duels between Symphony X guests guitarist Michael Romeo and keyboardist Michael Pinella, which seems a little strange to feature on a thrash trio's record; "King With the Axe" starts like some Manowar epic, then busts out the hi octane riffs. "Killing On Monroe Street" is the best at channeling that NWOBHM spirit that influenced early Metallica, and "Stab" once again sounds like the Bay Area legends, with some fast as fuck bass.

Thrashback has a lot going for it, especially the vocals. Not all of the riffs stick with the listener, but it's clear this was Whiplash doing what they always did best, and thus it's easily the best record the band had released since 1990's Insult to Injury. The band could (and did) easily mesh a few of these cuts in with their classic material for live shows, and it would have been a great direction for them to continue, had bassist Tony Bono not sadly passed away a few years after its release. I don't think I'd rank it up alongside the first three in over quality; for all its vigorous, youthful renewal, it's just not that catchy for the most part, but at least it's successful enough to not feel like you're being slapped in the face by 90s bullshit, and it was good to see a band realize this in such order after straying from the path only 1-2 years earlier.