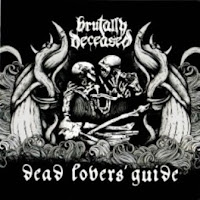 2010 will go down in history texts as the year that the Czechs became the first people to successfully manufacture a time machine, and though it only traveled back about 20 years to the Swedish death metal scene of 1990, much field study was accomplished in a short span of time to the craftsmanship of classic albums, specifically Left Hand Path by Entombed or Like an Ever Flowing Stream by Dismember. The tones, settings and devices were replicated with loving care, but upon return to the 21st century, the temporal explorers all quit the Time Agency and then decided to form a band. That band is Brutally Deceased. The hour is now, not 1990, and the album Dead Lovers' Guide has arrived, which must be one of the most guiltless excursions down memory lane I've ever heard, if those memories were skeletal fingers clutching at my ear drums from the earth of a clandestine cemetery.

Yes, Brutally Deceased will come under fire like so many other bands for their utter lack of originality, and I myself have found myself growing tired of such releases, but Dead Lovers' Guide is so unapologetic in 'getting it right' that I've naught but admiration for what they've accomplished with it. The Czechs readily admit that they formed this very band for the worship of Swedish death metal, so we are left to judge it upon those merits alone. Innovation was never really in question for this debut, and about the best I can say is that the vocals are more guttural and blunt than those of an L-G Petrov, but otherwise it functions on the same course, with dark and morbid, explosive guitar passages that conjure oppressive, sepulchral nostalgia through the notation alone, with a rock steady rhythm section and a front man who sounds like the very garbled graveyard dirt itself being manifest into a golem of elemental death.

Like the late lovers on its cover, the album wastes no time in embracing the emptiness of your heart with its downtrodden, almost romantically woven rhythms of "Lustful Sodomy in the House of God". It's a fine setup, but immediately eclipsed by the uproar of the title track, as massive chords and streaming guitars cycle through explosive postmortem, and a breakdown that is almost the match of anything Entombed wrote for Clandestine. Other tracks of note include the sinister, surging "They Shall Feast", coiled hostility of "Demise of the Human Swine", and nihilistic blitzkrieg of "All That Rots and Withers", which eschews the fragile balance of melody and aggression to blast and brutalize your person. The band also covers, fittingly, the opening track to Like an Ever Flowing Stream, "Override of the Overture", and though it's not different enough from the original to truly standout (how could it be, this band is already akin to a paraphrased tribute to early Dismember), it meshes well with the band's own content.

I've said it before many times, but the relationship of the listener to the Dead Lovers' Guide will depend almost entirely on how much they're willing to once again delve into the same terrain. There's nothing dishonest about the intentions here, it's Swedish death metal, non Swedish band, and Brutally Deceased will have it no other way. If you're attention span simply cannot hold another album that sounds like Entombed, Dismember, Grave and Unleashed circa the dawn of the 90s, then it probably will not succumb to the wiles of this debut. However, if you seek more of this sound, or you're willing to make just one more exception, then I must admit that the Czechs have done a pretty bang up job of writing good songs with a loyal dispensation to their influences, not directly biting off riffs but coming very close in both attitude and sepulchral attitude. Dead Lovers' Guide sounds enormous despite being derivative. Clearly the band is in love with the tone and structure here, and it shows in the final product.