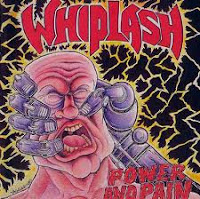 The fact that the band is called Whiplash should not be lost on anyone, because here on their debut Power and Pain, the New Jersey trio of Tonys sounded quite like a sped up, hyperactive and vicious East Coast answer to Metallica (with a few shots of Slayer to get the drunk on faster). In particular, Power and Pain reminds me highly of Kill 'Em All, only if that album hadn't shaved for a few month, and sauntered on into your life with not only more stubble than you could remove outside of a Brazilian wax, but additional shreds of gross carnage stuck to its beard. That said, it's a ripping good time, if not so refined or memorable as its followup Ticket to Mayhem, and on occasion here the band rips out one of the best riffs of their career.

The trademark of Whiplash is not necessarily their mid paced, aggressive thrash material, but the way they spasm through such fast guitar lines, similar to how Canada's Razor would become a few years into their career. There is almost always the guarantee of some cutting guitar fill running rampant like a serial slasher, and this is best appreciated in no frills assaults like "Message in Blood", "Power Thrashing Death" or the unbelievable "War Monger", which bleeds the ears with cool. Judging by this material, its a wonder Whiplash did not escalate rapidly to the ranks of a Metallica, Megadeth, or Slayer, but in truth, some of the songs simply lack the staying power of those heard on Kill 'Em All, Killing is My Business, or Show No Mercy. For every "Spit On Your Grave" we've got a "Red Bomb" or "Stirring the Cauldron", and though they penned their "Nailed to the Cross" long before Destruction's popular anthem of the same name, it's just not as exciting.

Despite the general tightness of Scaglione's hammering and Tony Bono's audible and bustling bass lines, it's really Portaro's throat tearing, painful vocals and dexterous fingers that launch Power and Pain into the memory. The album also has a classic, timeless production to it that is sure to please ears enamored of a Show No Mercy, Kill 'Em All, or Darkness Descends. Dirty, distinct, and unforgiving. As far as East Coast thrash, Whiplash were certainly one of the best we had, blitzing alongside the better works of Anthrax, Nuclear Assault and Overkill, and leaving most of the rest completely in the dust. It's not my favorite of the bands works, as I prefer the writing on Ticket to Mayhem and the more melodic Insult to Injury, but it's undoubtedly their most vicious and energetic, the blazing trio putting everything on the line to hack the listener into bits and stake out a claim for themselves in the goldmine of their rising art form.